For other uses, see Casinopolis (disambiguation).

Casinopolis (カジノポリス, Kajinoporisu?) is a gigantic casino that appeared in Sonic Adventure as an action stage. Casinopolis is quite popular for the citizens and tourists of Station Square. It is located in the Casino Area and has many bright lights. It is usually only open at night, and can be played through by Sonic, Knuckles and Tails as their third, second and second action stage of their respective stories.

The interior of Casinopolis is dominated by the presence of a massive Sonic statue, apparently made of golden Rings. The statue is immediately visible when playing as Knuckles, but for Sonic to view his likeness, he must collect a huge number of rings and deposit them into the vault of the casino. This statue is extremely fragile, as Knuckles can shatter it with one punch.

Around the main floor of the casino are the vault, an information center, a large shower room, several small slot machines and two pinball machines. The pinball machines are quite different from each other; the NiGHTS machine is based on a five card (poker style) system, and large ring bonuses are awarded based on card combinations gained while playing pinball (i.e. one pair, two of a kind, three of a kind, etc.), while the Sonic-themed one functions as a giant slot machine with different levels of rewards gained, depending on the combination achieved.

The player is given three "balls" after entering either machine. If the player loses all three before gaining at least 100 rings, the machine automatically drops Sonic into the large garbage dump built under the casino (The Dilapidated Way). Dr. Eggman's Badniks seem to have taken up a patrol here, but if one is willing to brave them, massive rewards can be earned. Multiple pathways are available due to the large fans built into the floor (apparently designed to blow garbage out of the way), and each path taken contains several capsules filled with ten rings each. Sonic can find several hundred rings down here, at least 400 of which are needed to complete the stage, meaning going down here can even be advantageous. Eventually, Sonic will discover a ladder that leads up through a grate in the floor into the shower room of the casino, where he can wash away the filth from the garbage.

Sonic's goal in this level is to deposit at least 400 rings into the vault by breaking the machines and playing pinball. This will form a golden mountain which he can scale to reach the white Chaos Emerald sitting on a ledge far above.

Tails is only allowed to play in the garbage area of the casino, racing Sonic through the neon-lit pathways and trying to reach the silver Chaos Emerald before his best friend does.

When Knuckles travels through the stage, he gains access to the second floor, but subsequently loses access to the garbage area, as he cannot activate the pinball machines. On the second floor, the most striking features are the presence of a large mechanical lion's head and model pirate ships complete with a robotic crew. His goal in this level is to find three shards of the Master Emerald, which may call for the destruction of the Sonic statue as a shard may be hidden inside.

Sonic can earn rings by playing themed pinball games, large teleporters are located in Casinopolis which force Sonic into a constant Spin Attack as Sonic himself is the pinball to these games.

The player is given three "balls" after entering either machine. A ball is lost when Sonic falls into the drain and is taken back to the plunger.

If the player loses all three balls before gaining at least 100 rings, the machine automatically drops Sonic into the large garbage dump built under the casino. If Sonic has more rings, he will be dropped outside the vault.

A Classic Sonic themed pinball game with a slot machine as its main feature.

A NiGHTS themed pinball game with card matching as its main feature. 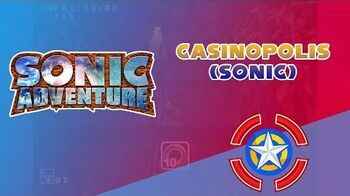 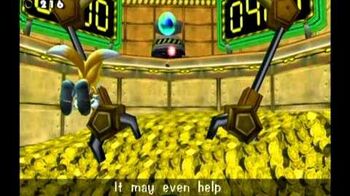 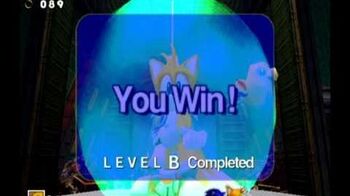 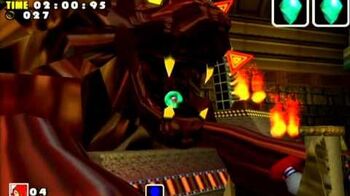