Sonic News Network
Register
Don't have an account?
Sign In
Advertisement
in: Sonic the Hedgehog 4: Episode I zones, Amusement theme

A huge city ablaze with neon lights flashing by filled with casinos, fun parks, city fairs, with dashing giant pinball machines infused with the city along with bumpers, hot-air party balloons glowing against the night skyline.

Northeastern on the world map

A bright and busy casino-inspired theme park, where shining neon lights fill the streets. Casino Street Zone is bustling with elaborate pinball areas and powerful cannons, so time your movement well to guarantee your chance of survival. If luck is on your side, why not explore for a moment and try your hand at the slots?

Casino Street Zone is the second Zone of Sonic the Hedgehog 4: Episode I. It is a beautiful city of fortune filled with huge cards, giant pinball slot machines and cannons to blast off in.

Casino Street Zone is featured as the third Act in Sonic the Hedgehog 4: Episode Metal.

Sonic finally arrives in a neon city that seemed to be locked in a perpetual night time party. Our dashing blue hedgehog soon realizes time is of the essence as dashes forward as he finds that this particular part of the city is a pinball style jackpot slot machine. While searching for his age-old nemesis, can a partier like our hero resist Casino Street Zone?

Mobile : Sonic bounces out with a charge spring into a small room that locks him in. In the room is a slot machine. There are two holes, one for the machine and one that can give several 1000 points. There are also bumpers. The only way for the player to escape is to have lady luck on their side and get 100,000 points! If they do, a small opening will appear in the pit of the room that's connected to a hallway that leads to the goal.

Console : In this part of the city, Sonic instead sees giant 5-foot-tall cards everywhere. Running past the cards at a high speed makes the cards spin, revealing different symbols: Sonic, Dr. Eggman and a Ring. Blazing full-throttle through them, Sonic comes to a dead end and finds the giant cards in stack on the ground and takes a "breather" on them but the cards knock over and when they do Sonic is pulled forward, racing on them as the cards become a magic "card-pet" twisting around the building. After landing with this information, Sonic realizes that these cards are special, as he comes to an end of building, but he looks up and sees cards floating and flipping in the air. He jumps on the cards, hopping on them to get to the next. When he does, he dashes onward to see what else the neon town has to offer.

Sonic comes to the edge part of the glowing gambling city. Here, Sonic comes across small cannons to fire him through these death-defying areas. Sonic soon comes to an almost unlimited array of bumpers trying to give Sonic grievance. No matter; they don't stop the blue wonder.

Almost out of the city, Sonic sees Eggman is having a party. Of course Sonic must be invited; in fact, he's the guest of honor. The party is a trap by Eggman as the exits are blocked off and Eggman has returned with another nostalgic invention. Sonic has his hands full now. Eggman's new take on his previous machine can spin around wildly by using its electric powers it can be like a spinning electrical blade. Sonic takes it down pretty easy like last time.

Continuing his pursuit of Sonic, Metal Sonic arrives at the Casino Street Zone at nightfall. Upon reaching the end of the city, he continues west with his sights set on Splash Hill Zone.

The Act is a modified version of "Act 1 - Neon City Adrift in the Night", bearing a changed level design and numerous foes for a higher difficulty than the original version. 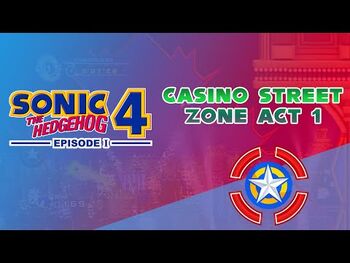 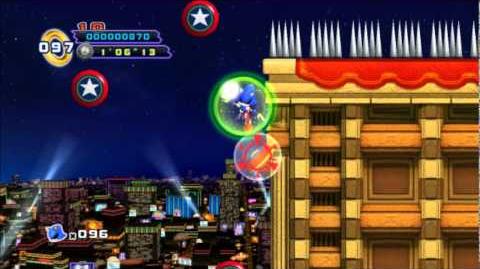