Casino Night, from the Nintendo 3DS version of Sonic Generations.

Casino Night (カジノナイト, Kajinonaito?) is the second Stage in the Nintendo 3DS version of Sonic Generations. It represents Sonic the Hedgehog 2 in the Classic era of the game.

The gimmicks from the original Zone featured in Act 1 include Flippers, slot machines, elevators, Bumpers and Spring Catapults. Noticeably, the playable character will also receive Rings each time they bounce off a Bumper or a Drop Target instead of points like in the original Zone.

Most of the gimmicks from Casino Night Act 1 reappears in Act 2, including Flippers, slot machines, elevators, Bumpers and Drop Targets (which function like their Act 1 counterparts), Spring Catapults, etc. There are also fast-moving platforms that the player has to use the Boost on to keep up with them. This Act also introduces giant Eggman-themed roulette wheels that Modern Sonic must jump across in order to proceed through the Act. On these roulette wheels, landing on a Ring symbol will grant the player fifty Rings, while landing on a Sonic symbol will grant the player one hundred Rings. To jump between the roulette wheels, the player has to press

when its symbol appears.

The layout of Casino Night Act 1 is a full 2.5D recreation of Casino Night Zone Act 1 from the original Sonic the Hedgehog 2, allowing Classic Sonic to run, flip, and roll through its nooks and crannies.

Casino Night Act 2 features a level layout unlike those in the original Casino Night Zone, being more tailored to the moveset of Modern Sonic. 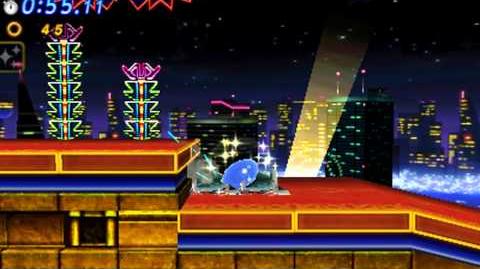 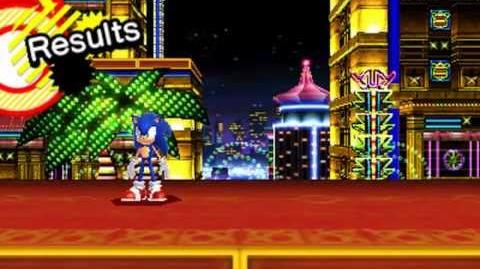