For the character in Tails' Skypatrol, see Carrotia.

Carrotia the Rabbit, from Sonic Universe #83.

Carrotia the Rabbit is a character that appears in the Sonic the Hedgehog comic series and its spin-offs published by Archie Comics. She is a mobian rabbit and a member of Wendy Naugus' Witchcarters.[2]

Carrotia's design draws inspiration from preexisting characters: her tail is similar to Sally Acorn's and her ears are modeled after Cream the Rabbit's.[1]

Carrotia is a mobian white rabbit with a peach colored muzzle and green eyes. She wears two large red ribbons on each ear, and wears a teal outfit with red highlights along with matching teal gloves. Her gloves have red cuffs and a gold button.

Carrotia and the Witchcarters were later forced to aid Wendy and Walter Naugus in an invasion of Eggman Land shortly after it became operational. Their actions did not go unnoticed, as Dr. Eggman soon arrived to investigate. Eggman and Metal Sonic were soon backed into a corner by the Witchcarters, who used the Dark Gaia energy they had stolen from the refinery to gain new abilities. Forced to retreat, Eggman called upon his Egg Bosses to reclaim the facility from the Naugus Twins and their minions.[2]

Carrotia was later seen with Falke Wulf and Bearenger the Grizzly on a ferris wheel, seemingly to be the only one truly enjoying it. There, she and her fellow Witchcarters faced off against Lord Mordred Hood and Conquering Storm.[3] During the fight, Akhlut the Orca and Tundra the Walrus shut down the generator enabling Carrotia her powers. As a result, she became drained of her power and was reverted to her regular state of mind thanks to Hood's Vertigo-Inducers.[5]

Carrotia wanted to get revenge on Wendy for controlling her against her will and thus joined Eggman's forces. However, Wendy was able to control her again when she was brought within the range of her magic.[5] Carrotia then fought against Dr. Eggman and his Egg Bosses, but was defeated easily. She was then put under the control of Wendy once more as the latter was made an Egg Boss. Carrotia, the Witchcarters and Wendy subsequently got shots from the Injector so they could all be contacted and kept in line.[6]

Soon after, Carrotia and the Witchcarters were recruited by Eggman to give back-up to the Hooligans and Metal Sonic in stealing the Chaos Emeralds and Gaia Keys from Castle Acorn.[7] Carrotia and the Witchcarters distracted the Royal Guard long enough for the Hooligans to steal the Emeralds and Keys from Castle Acorn and then proceeded to slow down Gemerl.[8] However, when Cream the Rabbit, Cheese the Chao, and Big the Cat rescued the Gizoid, Carrotia and her allies were forced to retreat.[9]

Carrotia is always lost in her own little world, forever in a constant daze. Despite her spacy, giggly, and flirty nature however, she is incredibly dangerous, like her partner Falke Wulf.[1] Carrotia also has the habit of speaking in childish rhymes.[3] Despite her cheerful, thoughtless demeanor, Carrotia seems to have a temper and a vengeful side. For example, when she was freed from Wendy's mind control, she became very angry and immediately teamed up with Eggman to get revenge on her.[5]

Carrotia is a strong fighter along with the rest of the Witchcarters. She is agile enough to perform a backflip. She is proficient in riding Extreme Gear, and when powered by the Dark Gaia energy she can shoot exploding kiss-shaped blasts of pink energy by blowing a kiss, or shoot carrot-shaped blasts of pink energy out of her hands which make even bigger explosions.[2] 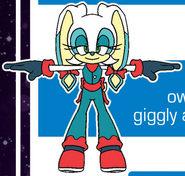 Retrieved from "https://sonic.fandom.com/wiki/Carrotia_the_Rabbit?oldid=2234497"
Community content is available under CC-BY-SA unless otherwise noted.