Carrier Zone before a race

A race set in the middle of a naval battle.

Carrier Zone (アフターバーナー[1], Afutā Bānā?, lit. "After Burner") is the third track of the Dragon Cup in Sonic & All-Stars Racing Transformed, representing the After Burner series as seen in its most recent game, After Burner Climax.

Carrier Zone takes place in the middle of a war zone in the ocean, with jets and ships in the heat of battle. Racers drive on aircraft carriers, boat through hazardous waters, and fly with F-14 Tomcats.

Racers start out driving on an aircraft carrier, but a plane Transformation Gate greets them after a short, straight stretch of the runway. After flying low through the battle, the racers land on another aircraft carrier, transforming back into cars. Once they drift through a U-turn, the runway suddenly ends, and the racers drop onto a lower level of the craft before passing through a boat transformation gate. Should the player immediately look left, they will spot a plane transformation gate at the end of a ramp. This allows an opportunity to transform into a plane earlier than the other racers, who must remain in their boats a little while longer before reaching another transformation gate. Eventually, the racers land back on the carrier where they started. After one final U-turn, the finish line awaits. 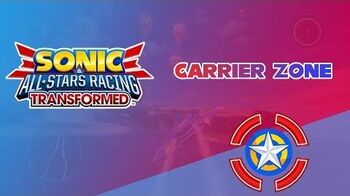