For the zone in Sonic Rush, see Night Carnival.

Sonic and Tails in Carnival Night Zone, from Sonic the Hedgehog 3.

A carnival full of contraptions.

Night life on the Floating Island is exciting. Bounce and flip your way across this colorful Zone which is filled with anti-gravity platforms.

Set in a massive metropolis on Floating Island that seems to have a never-ending carnival going on during the nighttime, Carnival Night Zone is full of lights, balloons, tilting cannons, giant rotating barrels, and plenty of Doctor Robotnik's Badniks like the springboard Clamer and pesky Batbot to give Sonic and Tails a hard time as they navigate the neon lights and spinning cylinders to reach the mini-boss, D-Struct Machine, and then Robotnik in his Egg Gravitron to clear the way to a cannon to launch them to the IceCap Zone after Knuckles causes some trouble for Sonic and Tails as he continues to block their path to the Death Egg with having them navigate the Zone in darkness after he turns off the lights until they find the switch to turn the lights back on.

After defeating Dr. Robotnik in Marble Garden Zone, Tails airlifts Sonic to Carnival Night Zone, and Knuckles runs there from the previous Zone. Partway through the Zone, Knuckles appears and turns off all of the lights (this does not affect the gameplay of the Zone, although it does raise the Zone's water level). Later, a switch will be pressed to reactivate the lights. After defeating Dr. Robotnik, Sonic and Tails will be shot out of a cannon to the next Zone. Knuckles can take a shortcut to a capsule, bypassing the boss completely. Knuckles will then use a teleporter to reach Ice Cap Zone.

Playing as Sonic or Tails, Carnival Night Zone is one of the longest Zones available in the game, but as Knuckles in Sonic the Hedgehog 3 & Knuckles, it changes from being one of the longest Zones to one of the shortest. In this case, each Act takes roughly just one-and-a-half minutes to complete, and the Zone lacks a boss fight in the second Act. The D-Struct Machine is still fought by Knuckles at the end of Act 1.

One element of the Zone is a series of hovering Spinning Wheels, which either move in a set pattern by themselves or can be moved up and down manually by pressing up/down on

, though the latter is not obvious initially.

Tails airlifts Sonic down into Act 1, and if the player chose playing as Sonic alone, Tails flies off after dropping off Sonic, but if the player chose Sonic and Tails, Tails will touch down behind Sonic to join him. Multiple paths can be taken, using all manner of various gimmicks in the Act, which can lead to some of the Giant Rings, before meeting up at the last Star Post before fighting the mini-boss.

Act 2 starts from the bottom of the shaft of the mini-boss fight at the end of Act 1. This Act contains some underwater sections, so a Water Shield is somewhat necessary. Midway through, Knuckles appears and hits a switch that darkens the Zone for the time being. However, after navigating the Act in the dark, another switch can be pressed to turn the lights back on.

Halfway through Act 2, there is an infamous area where Sonic or Tails is trapped in a vertical shaft and must push a Spinning Wheel down a gap low enough for them to escape through. This area is unavoidable; the player will encounter this no matter which route is taken. While it appears to be a traditional jumping puzzle, it is not meant to be bypassed this way. It is massively difficult to get by like this, so it is much preferable to use the up and down method.

The Bowling Spin is the sub-boss of Act 1. A part of it spins and levitates in a constant diagonal motion throughout the battle, bouncing around the corners of the screen and destroying foothold blocks. The main piece electrifies itself every so often. The player must be sure to defeat it before the footing is lost.

Dr. Robotnik appears in the Egg Gravitron that is unreachable by normal jumps (Unless playing as Tails, who can hover into Robotnik). Robotnik will drop a type of orb onto the ground. Upon doing so, he will approach directly above and create a rotating electric shock field with parts of the machine, which will attempt to draw in the player. After that, Robotnik will lower down to retrieve the orb, which is the player's best chance to attack.

In the Sonic the Hedgehog comic series and its spin-offs published by Archie Comics, Team Dark and a Tele-Pod controlled by Snively passed through Carnival Night Zone while racing toward the Master Emerald.

In the Sonic the Comic comic series and its spin-offs published by Fleetway Editions, the Carnival Night Zone was a theme park that had been built on the Floating Island by the Marxio Brothers as a money-maker for Dr. Robotnik. They briefly tricked Knuckles the Echidna into thinking that Robotnik was not involved and, promising to give him revenue from the park to fix up the Floating Island's monuments. However, when the truth of Robotnik's involvement was revealed, Knuckles broke the Zone off from the rest of the Floating Island, making it plummet into the Emerald Hill Zone.

In the Sonic the Hedgehog comic series and its spin-offs published by IDW Publishing, Carnival Night is an area on Angel Island. its past is mostly identical to its video game counterpart's, up until after the events of Sonic Forces. 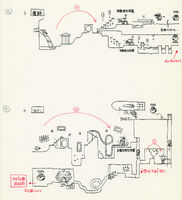