Sonic News Network
Register
Don't have an account?
Sign In
Advertisement
in: Articles in need of expanding, Pirates, Eggman's creations,
and 4 more
English

Captain Jelly, from the Wii version of Sonic Colors.

None (referred to as a male)

In the meantime, enjoy the park. I'll leave you your own private tour guide!

Captain Jelly[1] (キャプテン・ゼリー[2][3], Kyaputen Zerī?) is a character that appears in the Sonic the Hedgehog series. It was a humanoid-based robot pirate created by Dr. Eggman. During the Wisp incident, it would guard one of Eggman's tractor beam generators, only to be destroyed by Sonic the Hedgehog.

Captain Jelly resembles a robotic, jellybean-shaped pirate who uses a lollipop as his "sword". He has an eyepatch over his left eye that has Dr. Eggman's logo on it.

In the Wii version of Sonic Colors, and its remaster Sonic Colors: Ultimate, Captain Jelly would guard the tractor beam generator on Sweet Mountain with its massive galleon and crew consisting of robotic minions. When Sonic the Hedgehog eventually arrived at the generator, Captain Jelly would engage the hedgehog. However, it was destroyed by Sonic, resulting in the shutdown of its tractor beam generator.

The fight begins with Sonic at the front of Captain Jelly's treat-themed pirate ship, and he needs to get past a long row of cannons shooting cannonballs to the back of the ship to hit a switch. There are two different cannonballs the cannons can fire; black and red. When destroying the latter type of cannonballs, it spawns Rings or from one specific cannon, a Yellow Wisp. After hitting the switch, Sonic jumps off the ship while the ship crash-lands, and Captain Jelly follows with a crew of bouncy rubber crewmates, which are harmless though they can be attacked for additional points and have a White Wisp pop out of them to fuel Sonic's Boost Gauge. Captain Jelly mainly attacks by simply jumping towards Sonic, landing on his cushioned round bottom and taking a moment to laugh, leaving him vulnerable for a few seconds before he jumps again. After Sonic hits Captain Jelly three times, Sonic will return back to the ship where he must repeat the above process once more. In the second wave, the cannons fire more frequently and once Captain Jelly appears, more crewmates will appear to accompany him though like before, they do not attack Sonic, though Captain Jelly will let off an angry steam whistle noise upon landing to signal he means business this time. Hitting Captain Jelly three more times will finally destroy Captain Jelly who releases Rings upon its destruction.

If Sonic obtained a Yellow Wisp from the cannonballs on the ship, he can use it once he is on the ground. The Yellow Wisp allows Sonic to use the Yellow Drill to tunnel into the ground and attack Captain Jelly from underneath and if done so, it deals three hits worth of damage, quickly progressing the fight into the second wave (or destroying it during the second wave), though Sonic will still have to avoid the Mole Badniks that spawn to attack him when underground using the Yellow Drill. In Sonic Colors: Ultimate, defeating Captain Jelly via this method will unlock the achievement, "Crunching The Captain".

Obtaining an S-Rank in this battle may require prolonging the Yellow Drill before hitting Captain Jelly. Hitting the Moles during this time might also be of help.

Captain Jelly is the boss of Sweet Mountain and the second or third boss of the Nintendo DS version of Sonic Colors (depending on the player's choice). It is fought with Sonic in Sweet Mountain Boss Act after clearing Sweet Mountain Act 2.

Sonic fights the boss on normal ground. The attack patterns of the boss is simple but in order to hit him, the player needs to attack his crewmates by boosting at them which also grants the player a Red Wisp to use the Red Burst. Once he's down, his core on his head will be shown and that's a chance to hit him. After getting damaged a few times, Captain Jelly will summon his pirate ship, which will launch cannonballs at Sonic (the regular cannonballs can be knocked back at Captain Jelly while the flaming cannonballs cannot be sent back and will damage Sonic). Using the Red Burst can do double damage and burns Captain Jelly for a few seconds. 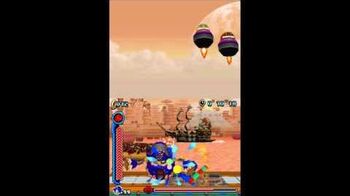 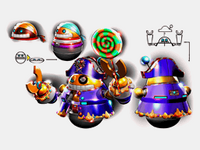 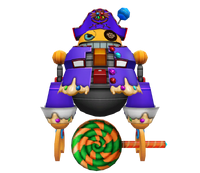