Sonic News Network
Register
Don't have an account?
Sign In
Advertisement
in: Sonic and the Secret Rings bosses, Pirates, Villains,
and 3 more

Settle down! I need that World Ring of yours!

— Sonic the Hedgehog, Sonic and the Secret Rings

Captain Bemoth (キャプテンベモス, Kyaputen Bemosu?) is a boss in Sonic and the Secret Rings. He appeared as the captain of a fleet of pirate ships that is being ravaged by storms (probably having been summoned by the Water Blue Ring).

He initially looked like an average Pirate Djinn until he fused with several Slime Djinn and transformed into a large leech-like creature with arms and a bearded face. He is mostly blue, with purple and green on various parts.

He is the one responsible for Sinbad the Sailor's capture and stole his World Ring to control the storms but instead ended up destroying a large portion of his own ships. Despite having no legs he can move very fast and create large waves of water, as well as generating electric shockwaves. He was defeated when Sonic pulled out his horns, which were his source of power. However, it is implied that Bemoth was not killed. 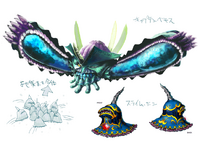 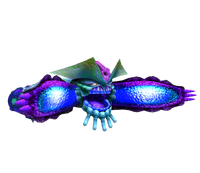