The Avatar in the Capital City.

How absurd! What can that rabble do with an all-out attack? I'll smash them to smithereens!

Capital City (キャピタルシティ, Kyapitarushiti?) is the sixteenth stage in Sonic Forces, and the fifth stage in the game to be played as the Avatar.

This stage is set within Metropolis, Dr. Eggman's city, which is a magnificent white city, filled with skyscrapers and brimming with technology. During the events of the game, the Resistance attacked the city as a part of Operation Big Wave, only to get overpowered by Infinite.

Capital City is located within Metropolis which appears as a magnificent and pristine, but sterile white city where geometric shapes appear to be a recurring architectural theme. It features multiple skyscrapers in various designs, numerous large-scale video screens, and open, see-through highways, all of which look like they are taken straight out of the future. Various buildings with advanced technology fill the city as well. There are also orb-shaped sentries inside the structures and hover cars that fly between the buildings. In addition, the sky above Capital City is free of pollution; instead, it is blue with a couple of clouds and numerous Resistance airships dotting it.

The bottom of Capital City is not visible; the entire ground level below the skyscrapers is obscured from view by a thick cloud cover. Also, Capital City has no traces of organic nature. Instead, it has metallic mimics of trees and bushes along the roads.

The stage primarily takes place on the rooftops and highways of the city, with some sections taking place within the buildings themselves.

While Sonic is busy looking for Shadow in the City and dealing with the Eggman Army's attack there, Knuckles notices that Eggman's troops are sent elsewhere and devises a daring assault on Metropolis, which he calls "Operation Big Wave", in which the Resistance takes advantage of the situation in the city by launching an all-out attack on the doctor's forces; if they can destroy Eggman's army piecemeal and capture Metropolis, the Resistance will win the War to Take Back the Planet.

The attack is soon launched on Capital City, with the Avatar joining in on the assault. However, Infinite soon arrives, and on Eggman's personal order, proceeds to deal with the opposing might of the Resistance himself. Using his Phantom Ruby prototype's powers over virtual reality, Infinite affects the gravity of the city and creates monstrous clones of himself to fight back against the Resistance. The resulting chaos causes the Resistance to suffer heavy casualties as they are thrown into disarray, losing 80% of their attacking troops. Even with their hopes riding on the Avatar, who is still able to fight despite the confusion, the Resistance has no choice but to take what troops they have left and retreat so that they can live to fight another day. However, as the Avatar makes their escape from the carnage, they have an unlucky encounter with Infinite himself...

Capital City is a relatively straightforward stage, with multiple pathways being available through Grind Rail sections or depending on which Wispon the player has equipped.

During the stage, Infinite will appear multiple times to use his powers to affect the gravitational pull in the stage. When this happens, time slows down while the Avatar adjusts to the new angle. This can be a disorientating experience for the player. Infinite will, as well, create multiple distorted and gigantic clones of himself that will destroy walkways with their hands, which will force the player down other routes. In terms of obstacles, the stage has cannons that will slide out of the ground and shoot red lasers that inflict damage upon contact. The player can jump over or run past these lasers, though.

Like other Avatar stages, Capital City features Wire Targets for the player to swing around on using the Wire Attack, and numerous Wisp Capsules with Wisps for fueling the Avatar's different Wispons. However, any Wisp Capsule containing Wisps that do not match any of the Wispons the player has currently obtained will be rendered intangible and transparent until the player obtains their Wisp's associated Wispon. This means, for example, that if the player does not have an Asteroid Wispon, then the capsules with Indigo Wisps will be unobtainable.

The stage begins on a highway, with a couple of Egg Pawns that can be attacked. The player must here use the Wire Attack to swing onto a grappling point to land on another highway. However, they can also use a second grappling point to collect a Red Star Ring.

After clearing out more enemies, the player will encounter a section with multiple lasers before launching off a Ramp. Whilst in the air, a small cutscene will play in which Infinite will fly beside the Avatar and use his Phantom Ruby prototype to invert the gravity and create giant, twisted clones of himself. The player will then land on a platform with several laser turrets that will fire forwards. The player can avoid this by using the Wire Attack to grapple over them. Shortly after, one of Infinite's clones will destroy the path ahead, forcing the player into a 2.5D section inside one of the buildings.

Upon emerging from the building and returning to a 3D perspective, Infinite wil show up again and turn gravity on its side, causing the player to land on the side of a building down below. After jumping from one building to another, the player must run up the side of another building, whilst avoiding laser blasts. At the top of the building, the player will be launched into the air by a Ramp. Infinite will then appear once more and turn the gravity back to normal, causing the player to land on the top of the building they just ran up of. The player with then immediately be launched forward by a Dash Panel and into the air by another Ramp. The player will then land on a Grind Rail with two adjacent Grind Rails on either side. The player must pick one of these two paths to advance forward.

After clearing the Grind Rail section, the player will land on a path that gets destroyed by an Infinite clone, forcing the player to arrive on another walkway filled with Egg Pawns. Here the player will have access to Green, Red, and Ivory Wisps to reach higher paths. Alternatively the player can just use grappling points to advance if they are not using a corresponding Wispon.

Lastly, the player is thrust into a running section where they must once again avoid oncoming laser blast before reaching the goal. As the Avatar has passed the goal, Infinite will appear and watch the Avatar fade into the distance. 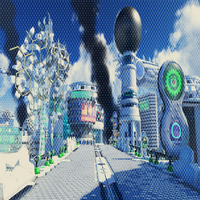