A Cannon Flapper, from Sonic Heroes.

The Cannon Flapper (キャノンフラッパー[1], Kyanonfurappā?) is an enemy that appears in the Sonic the Hedgehog series. It is a mass-produced Pawn Series Badnik model created by Dr. Eggman, and a variant of the Flapper.

The Cannon Flappers look very similar to the basic Flapper, possessing the round torso, black undercarriage, dome-shaped head, airplane-like wings, the two turbines on their backs that serve as jetpacks, pointy nose and panel-based mouth, and flight visors that Flappers have. However, unlike the Flappers, the Cannon Flappers have a missile launcher on their aforementioned undercarriages.

The Cannon Flappers made their first appearance in Sonic Heroes as enemies. In this game, they can be found in Seaside Hill, Ocean Palace, Grand Metropolis, Power Plant, Rail Canyon and Lost Jungle.

Because they float in midair, the Cannon Flappers typically float outside the reach of most of the player's attacks. The easiest way to destroy them is by using Thunder Shoot to knock them out of the sky, leaving them open to any attack. If Thunder Shoot is leveled up to at least Level 2 however, then it may be enough to destroy a Cannon Flapper in one shot. Also, upon their destruction, they grant the player 100 points.

In Sonic Rush, Cannon Flappers only appear in Altitude Limit. In gameplay, Cannon Flappers float in a fixed point in midair. They often appear in sections with gaps where they will try to push the player off the flying platform used to ascend such gaps. As such, they can be very dangerous obstacles since they can both deal damage to the player with their attacks and when the player touches them during the often delicate ascension procedure. When the Cannon Flappers spot the playable character, a speech bubble with an exclamation point will appear above them. They will then immediately after fire a missile in a downward diagonal direction.

Other than that, the player can easily destroy a Cannon Flapper with a basic Spin Jump/Axel Jump while avoiding their missiles. Also, upon their destruction, they release an Animal.

In Sonic Rivals, Cannon Flappers appear as common enemies in various Zones. In gameplay, they can fire homing missiles that can follow the playable character.

In Sonic Rivals 2, Cannon Flappers are again common enemies that can be found in different Zones. Like in Sonic Rivals, they can, in gameplay, fire homing missiles that can follow the playable character.

The Cannon Flappers are all capable of flight using the jetpacks on their backs. They are also equipped with a cannon that can fire either explosive homing missiles or laser bullets.

In the Sonic the Hedgehog comic series and its spin-offs published by IDW Publishing, the Cannon Flappers are Badniks created by Dr. Eggman. Their past is virtually identical to their game counterparts' up until after Sonic Forces. 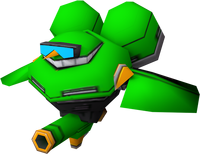