Tails in Cannon's Core, from the 2012 remaster of Sonic Adventure 2.

The massive core of the Eclipse Cannon on the Space Colony ARK.

Cannon's Core is the final stage of Sonic Adventure 2 and Sonic Adventure 2: Battle that is played during the Last story. It is the longest stage in the game and includes all playable characters, other than Shadow.

With only a short amount of time left before the Space Colony ARK impacts the planet, Sonic, Tails, Knuckles, Rouge, and Dr. Eggman must work together in order to bring the Master Emerald safely to the Eclipse Cannon's core and stop the ARK's collision course. After many efforts, Sonic and Knuckles reach the Core together, only to find the Ultimate Lifeform's prototype, the Biolizard. Shadow, after being influenced by Amy, volunteers to destroy it while Sonic and Knuckles reach the altar.

In this stage, all of the characters (with the exception of Shadow) work together to get the Master Emerald to the core of the Eclipse Cannon on Space Colony ARK. Each character takes turns clearing one section of the level, and once the character reaches the end of their section, the game automatically switches over to the next character.

This level features Time Stop Switches that freeze time, which are useful for they can also freeze the clock for an easy A Rank and can be used infinitely. The switches also freeze waterfalls, acid pits, enemies, moving blocks fast-flowing water, and also deactivates laser fields, so they can be walked on or through. However, the switches only last about ten seconds, and a beep will start to sound when the effects are about to end, so the player must be careful.

1st Mission: Get to the core of the colony!

First, Tails and Dr. Eggman must destroy the security doors to allow the others to reach the chamber above the Eclipse Cannon. Next, Rouge must drain the liquid from the Core so that Knuckles can Swim to the Ball Switch that opens the final security door. From here, Sonic is able to proceed to the core.

By picking up every Ring along the main path, it is possible to have 100 Rings by the end of Dr. Eggman's section. The player should keep firing with both Eggman and Tails to avoid damage and losing Rings.

Finding the Lost Chao in this stage is a fairly complicated process. The player must first complete Tails' section as normal and proceed with Dr. Eggman until they come to the gap immediately after the first Point Marker. Rather than jumping onto the floating platform and falling down the shaft as usual, the player should hop up onto the guardrail of the ledge they are on, then Hover across to the door on the other side. They then need to blow up the Steel Containers behind it, and they will see an Ancient Ruin straight ahead. They should play the Mystic Melody near the shrine, then leave this room and finish the rest of Eggman's section as usual.

Once in Rouge's section, there is a tunnel on the left of where Rouge falls, which has now been opened by Eggman's Mystic Melody. The player must run to the end of the tunnel to find another Ancient Ruin, play the Mystic Melody again, then complete this section as normal. At the beginning of Knuckles' section, a few new platforms will have appeared since the player activated the Ancient Ruin in Rouge's section. The player must follow the platforms up to a Pulley, and they will be taken to another Ancient Ruin. They must play the Mystic Melody once again, and then finish the section.

Finally, the player must proceed through Sonic's section as usual until reaching the waterway. When the player reaches the peak, they will see that a row of Rings has appeared. They must use the Light Speed Dash to transport Sonic to a platform with two enemies and a door. When the player destroys the enemies, the door opens and the lost Chao is waiting on the other side.

If the player does not waste any time messing around with enemies or unnecessary Rings, completion of this stage is possible in less than six minutes. To score an A-Rank, they should attack lots of enemies while they are moving with Tails and Dr. Eggman.

Aside from the typical increase in enemies, the player will notice the almost every single trap has been slightly modified. Often, Time Stop Switches have been moved or even disappeared. As long as the player is aware of these changes, they should be able to get through the obstacles ahead.

Cannons Core features a grand total of five Big the Cat cameos, with one in each featured character's section. In Tails' section, just after the platform ride down, Big is hanging onto the wall to the right of the door up ahead. Once Dr. Eggman's section is reached, the player should go down the long drop with the laser field. At the bottom, there will be some Time Stop Switches on the wall, and Big is sitting above the switch on the left, fishing. Rouge's section features Big close to where Knuckles will start, and in his section, the player should descend through the room with the laser field, then look ahead at the next tunnel and turn right. Big can be seen behind the right wall, close to floor-level. Finally, in Sonic's section, the player should travel to the start of the long slide. From there, they must go backwards and hit the last Time Stop Switch on the left, then look forward and left. Big will be sitting on a pillar out in the open. 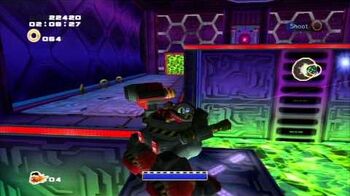 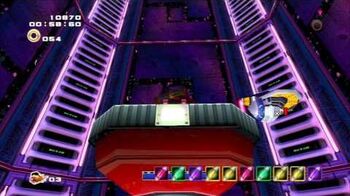 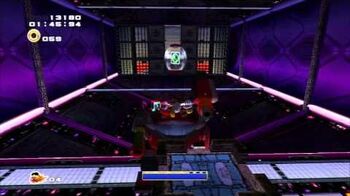 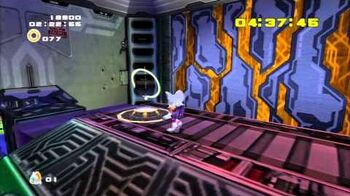 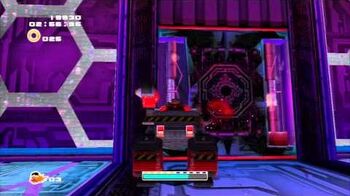