The Cameron (キャメロン, Kyameron?) is an enemy that first appeared in Sonic Heroes. It is a robot model created by Dr. Eggman.

Camerons appearance closely resembles real turtles. They are mostly colored green with a yellow underbelly and have short flipper-like legs, large eyes and a cannon on top of their shell.

In Sonic Heroes, the Camerons are enemies most often encountered in the early Stages. They are completely retracted into their shell when asleep. Typically, Camerons come in groups with Egg Pawns.

When spotting the player, the Camerons deploy cannons that fire green hoop-like blasts of energy, although the open center will still damage the player. When defending, they retract into their shell, where they can resist most attacks. However, they can be flipped over with the Tornado Jump and allow the player to attack its less-armored underside. Power Formation attack can take out an upright Cameron easily in one hit, and a fully leveled up Speed Formation attack can damage it as well.

In Sonic Rivals 2, the Cameron appears on a collectible card in the game.

In Sonic Runners, the Cameron is one of the companions available in the game. Curiously enough, they have the same golden shell as the Gold Cameron in this game. 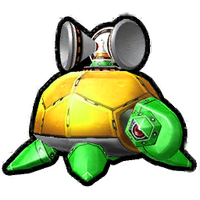 Sonic Runners
Add a photo to this gallery 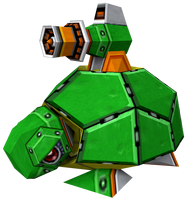