Sonic News Network
Register
Don't have an account?
Sign In
Advertisement
in: Sonic and the Black Knight stages, Castles

South-southeastern region of the Grand Kingdom

Camelot Castle (キャメロット・キャッスル, Kyamerotto kyassuru?) is the second area of Sonic and the Black Knight. It refers to the giant castle in the middle of this region and the giant fortress-like town surrounding it, which is the renowned city of Camelot, the capital of King Arthur's kingdom.

This urban area hosts a large and thriving town of long-eared Arthurian folk (and their Blacksmith) living in and around its massive fortifications. Once a peaceful city with rich green vegetation and pure water, it was corrupted by the forces of the underworld, following King Arthur's bewitchment of the scabbard of Excalibur. During the king's tyrannical rule, Knights of the Underworld and crows would haunt the streets and occasionally destroy Camelot Castle and terrify the townspeople.[1]

Giant ballistae line the battlements where upon launch, Sonic will be able to grind on the rope, along with statues of ancient kings and feudal nobility. Sonic also briefly explores the storm drains and waterways[2] beneath the castle—routes that become rather more significant later, in Knight's Passage.

After being cast aside by King Arthur during their battle at Misty Lake, Sonic and Caliburn journey to Camelot Castle in order to find a smithy who can sharpen Caliburn. Merlina declines to join them, claiming that as she is the Royal Wizard, she would attract unwanted attention from the folk of the castle town.

When Sonic and Caliburn arrive, the settlement is being attacked by the Knights of the Underworld.[3] Cutting a path through the nightmare forces, the hedgehog eventually makes his way to the Blacksmith's shop, where he is greeted by the Arthurian world's doppelganger of his best friend, Tails. The Blacksmith happily agrees to repair Caliburn's blade; after which Sonic proceeds on his quest to consult Nimue in Deep Woods.

After Deep Woods, Sonic is sent back to Camelot Castle by Nimue, to free the Arthurian folk being held captive in King Arthur's jails. Later, after the battle on Faraway Avalon, the Knights of the Round Table corner Merlina within the castle, before she reveals herself as the Dark Queen and uses the Scabbard to destroy most of the castle grounds and reshape it into a more sinister form as Sonic and the Knights make their escape while this is happening.

If the Sonic and the Black Knight's Blacksmith Menu is to be at least semi-canonical, it seems probable that Sir Lancelot, Sir Percival, Sir Gawain and Sonic revisit Camelot Castle (and, specifically, Blacksmith's shop) multiple times over the course of the adventure, for weapons forging and so-forth. In fact, it may be that all the Knights of the Round Table (including Sir Galahad and Sir Lamorak) actually live in Camelot Castle when they're not off adventuring.

Items which can be acquired in the Camelot Castle missions include: 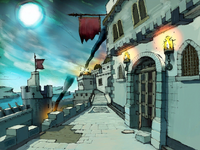