A Cage, from Sonic Heroes.

The Cage[1] (ケージ, Kēji?) is an object that appears in the Sonic the Hedgehog series. It is a variant of the Container used to contain special items.

Cages are cubic boxes made of several durable dark metal bars, and are about the size of a regular Container. In gameplay, they hold significant items inside them which the player can release by breaking the Cage and then obtain.

The Cage made its first appearance in Sonic Adventure 2 and Sonic Adventure 2: Battle. In this game, they can be found in numerous Stages and can only be destroyed by hitting them with nearby Missiles aimed at them or appropriated Kiki bombs.

Cages in Sonic Adventure 2 serve two purposes. The first one is blocking passages for the player, requiring the player to destroy them to proceed. The second one is holding Animals imprisoned.

In Sonic Heroes, Cages are much smaller than in Sonic Adventure 2 and are the rarest of all the game's Containers. In this game, they can only be broken by attacks launched when in Power Formation.

Cages in Sonic Heroes can be found in each Stage in the game. Most of them contain a Special Stage Key which the player can enter the Special Stages with, while few of them also hold Item Boxes or Switches (especially in Super Hard Mode). They are either lying on the ground or flying in midair due to a small propeller on top of it. In the latter case, they can be brought down to the ground with Thunder Shoot.

In Sonic and the Secret Rings, Cages can be destroyed very easily using various attacks, such as the Homing Attack. In this game, they often contain Rich Rings and Fire Souls.

In the Wii U and PC version of Sonic Lost World, Cages can be broken by the Homing Attack. In the various levels, they will often contain butterflies that the player will need to free in order to move on to the next area. 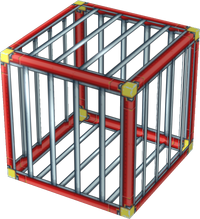 A model of an unused red Cage in Sonic Heroes.
Add a photo to this gallery