Bushbubble[1] (ハッパー[2], Happa?) is an enemy that appears in Knuckles' Chaotix. It is mass-produced, light bulb and plant-based Badnik model created by Dr. Robotnik, and the equivalent of the Moto Bug.

The Bushbubble is a plant in a jar and a light bulb at the same time. It has a stone-shaped yellow head with a black spot or hole where two white eyes with black pupils are seen. Below the head, there is a metal cylinder stalk that ends in a a ball that is seen in the end of the badnik. The neck appears in a glass dome that is closed with a metal plate.

There are leaves near a yellow plate with a green line that is located above the ball. The badnik constantly flashes light.

The Bushbubbles only appear in Botanic Base, where they move left and right, spinning their leaves around. Jump onto them or roll into them to destroy them. In darkness, the Bushbubbles' flower head and the jar will become a light bulb, making them dangerous to the touch; in this case it is necessary to roll into them. Like many of the enemies in the game, Bushbubbles are powered by synthesized Rings which they drop upon defeat. 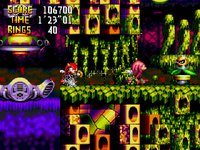