Bunker the Tortoise, from Sonic the Hedgehog #282.

Bunker the Tortoise, also referred to as Bunker the Turtle,[1] is a character that appears in the Sonic the Hedgehog comic series and its spin-offs published by Archie Comics. She is a mobian tortoise, a member of the Shijin Warriors and the shrine matron of the Shijin Shrine.[2]

Bunker is a mobian tortoise with red eyes.

Bunker has a calm and welcoming demeanor, necessary her for ability to sense chi. In spite of her mellow appearance though, she will fight intensively.[1]

Thanks to her calm mind, Bunker has the ability to sense the chi of those around her and herself. She is also efficient in combat and is said to pack quite the punch.[1][3] 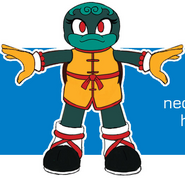 Retrieved from "https://sonic.fandom.com/wiki/Bunker_the_Tortoise?oldid=1932911"
Community content is available under CC-BY-SA unless otherwise noted.