The Bumper Car[1] is a gimmick that appears in the Sonic the Hedgehog series. It is a small floating car in Twinkle Circuit that the playable characters can ride.

Bumper Cars differ from real world ones, having the ability to hover in the air via turbine-like objects on the rear either side of the player. Their colors depend on the characters using them (in Twinkle Circuit only):

In the gameplay of Sonic Adventure, and its enhanced port Sonic Adventure DX: Director's Cut, Bumper Cars are really fast, capable of reaching high speeds in seconds. Their speed can be further increased by collecting Rings. Bumper Cars are also equipped with a Ring counter on their back that increases when collecting Rings. Each car has great endurance, capable of piercing another car of the same type. However, sometimes it lose Rings. They are used by the Cart Kiki to race and damage their enemies. However, destroying them causes the car to be freed from their control. The player can then press

to hop into the Bumper Car and ride it.

In gameplay, the player has to hold the Jump button to accelerate, and the Action button to brake. The player cannot leave the Bumper Car until the race is finished. 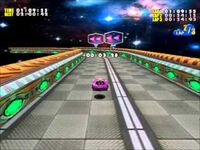