A Bubbles, from Sonic the Hedgehog 4: Episode I.

Bubbles is balloon fish type robot who returns back from the ruins of Angel Island. Due to Eggman's budget cuts, not all versions of Bubbles are spiked. However, watch out for the red ones!

The Bubbles[2] (ハリセンボ[3][4], Harisenbo?) is an enemy in the Sonic the Hedgehog series. It is a mass-produced, pufferfish-based Badnik model created by Dr. Eggman. These models hover around by their lonesome or in groups, but will quickly protrude spikes to wound those that get too close.

Bubbles are loosely based on real-life pufferfish. Bubbles' blue body are smooth and spherical. Up front they have a nozzle-shaped head with two big black eyes on each side and a yellow neckline. Their rears also have a hole where a few wires go. On them, the Bubbles have a total of seventeen white spikes.

Since Sonic the Hedgehog 4: Episode I, Bubbles have become more detailed in appearance and their spike holes have turned purple and less visible. In return, they only have thirteen spikes on them. Their neck holes are also slightly larger, and under their bodies is a small rocket which keeps them floating. Their rearholes are also changed to seal air on each side of their body.

Like Spikers, the Bubbles are very deceiving with their innocent appearance. On their own, Bubbles hover around alone. When the player is closing in on a Bubbles though, it starts hovering toward the player and starts protruding and retracting spikes from its body, which also makes them completely immune to any attacks, even for Invincibility, Super or Hyper states. The Bubbles are best destroyed using the Spin Jump, Sonic's Insta-Shield or Knuckles' Gliding when their spikes are not retracted. However, the player must time their attack's execution correctly, or the Bubbles' spikes will protrude to inflict damage on the playable character. Also, upon their destruction, they will reward the player 100 points and release an Animal.

In gameplay, the Bubbles hover in midair from left to right, carrying black TV Monitors with one or two letters behind them. In gameplay, the player needs to aim the cannon they are in so that Sonic can hit and destroy the Bubbles with the right TV Monitor. If they destroy the right Bubbles, they will be rewarded with some Gold Rings. On the other hand, if the wrong Bubbles is destroyed, then the playable character will fall down using their "hurt" animation and return to the cannon. Should this instance occur three times in total, a voice will tell the player which Bubbles was carrying the right TV Monitor, before Sonic is taken back to the normal Act without being given any rewards.

In both episodes of Sonic the Hedgehog 4, the Bubbles returned as common enemies. In these games, they appear in two colors. The traditional blue Bubbles with spikes are present; however, due to Eggman's budget cuts, these Bubbles do not have spikes. Red Bubbles make their debut in these games and are slightly more dangerous as they can protrude spikes.

Diagonal chains of Bubbles are found in nearly every level. Many of these chains appear over bottomless pits, forcing the player to use the Homing Attack to skip across them. Unlike in Sonic the Hedgehog 3, Bubbles in Sonic the Hedgehog 4 will not chase after Sonic and will instead remain stationary. Also, upon their destruction, they will reward the player 100 points and release an Animal.

In the 2012 remake of Sonic Jump, The red variation of the Bubbles appear as enemies. They are only encountered in Jungle Zone.

In gameplay, like in Sonic the Hedgehog 4, these Bubbles float in one place and protrude spikes quickly. However, the player can destroy them with the Spin Jump at the right time.

Bubbles can hover in the air with small rockets, despite that they did not need that in their first appearance. Bubbles have all their spikes hidden inside their bodies. While Bubbles can be harmless at first, they will reveal they spikes quickly and without any warning which can cause unexpected damage to the player. 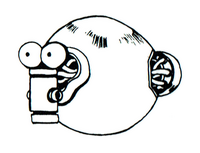 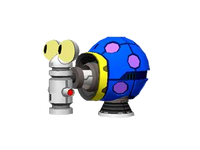 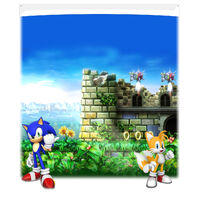