Bubbler's Mother (マザーバブラー, Mazābaburā?, lit. "Mother Bubbler") is a Badnik which was set to appear in Sonic the Hedgehog 2. It was supposed to appear in Chemical Plant Zone. However, it was scrapped in development.

Its design is that of a three-eyed fish. It would swim in the water past the player and drop Bubbler badniks around itself. The Bubbler badniks would have been colored purple in appearance, as seen in concept art. 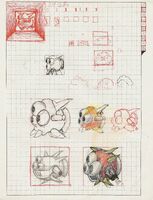