Template:Character Bowser Jr. is a character from the Mario universe. He is Bowser's son. Bowser Jr. is the heir of the Koopa Troopa army and Dark Land. He often aids his father in overtaking the Mushroom Kingdom and combating Mario and his friends. He wants nothing more than to fulfill his father's evil goals. He participates in Mario & Sonic at the Olympic Winter Games as well as in Mario & Sonic at the London 2012 Olympic Games.

Bowser Jr. wasn't playable in Super Smash Bros. Brawl, but he appeared as a trophy and as many stickers.

Bowser Jr.'s first Sonic appearance was Mario & Sonic at the Olympic Winter Games. He was a newcomer in the game along with Donkey Kong, Metal Sonic, and Silver. In the Adventure Tour for the DS version, he is one of the major antagonists, teaming up with Metal Sonic and joining Bowser and Dr. Eggman's side, trying to stop Mario and Sonic from rescuing the Snow Spirits.

His ability type is All Around, while his specials are 'Back Spin Shell' (Wii version) and 'Spinning Shell' (DS version).

Bowser Jr. returns in Mario & Sonic at the London 2012 Olympic Games with an All Around ability type again. He has the highest power stat and lowest technique stat among all All Around athletes. 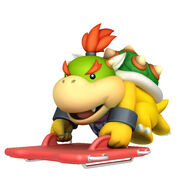 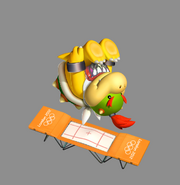