Gotta be careful not to fall off here!

A bottomless pit,[1] also called a bottomless abyss[2] or simply a pit, is a hole that causes a loss of a life for the playable character if they fall through it. Bottomless pits are common in platforming games, such as the Sonic the Hedgehog series. Bottomless pits are often found as holes in the lower sections of a level. That is, a player character dies when they reach the bottom of the playable area. The player has to avoid these pits by jumping, using gimmicks, or other abilities.

Bottomless pits can be found in almost every platforming title in the Sonic the Hedgehog series, positioned at the very bottom of levels, Adventure Fields, boss stages or Special Stages. Bottomless pits are generally scarce during early levels, but become more frequent as the game progresses; some levels are almost entirely suspended above bottomless pits, with falling off the level a constant threat. Falling into a bottomless pit will cause the player to lose a life regardless of Ring count or invincibility, potentially resulting in a Game Over if the player has no lives remaining.

Some levels feature variations of this obstacle. In most levels that feature anti-gravity as a gimmick, such as Crazy Gadget, it is possible for the player to fall off the top of the screen as well as the bottom. Some pits, rather than being truly bottomless, have a floor of spikes (such as in Green Hill Zone) or lava (such as in Hill Top Zone), giving the player the opportunity to escape if they are fast enough, but at the cost of losing their Rings. In addition, some levels in the Sonic Adventure series will block the player from falling into a bottomless pit by releasing a jet stream that makes the player float above it.

Bottomless pits in 3D games have become even more common, as the player can mostly fall into a dark hole, ocean/lake or quicksand sections of the level and thus lose a life. In recent games, the players have been warned before entering section with bottomless pits with signs of an exclamation mark, as it is first seen in Sonic Unleashed and Sonic Colors. Since Sonic Generations, there can be seen dark orange and black colored, floating warning signs, featuring render of Sonic's death pose from earlier games. They also exist with the same design as Sonic Generations in Sonic the Hedgehog 4: Episode II and Sonic Colors: Ultimate. However in Sonic Lost World and Sonic Forces, these warning signs were not used. 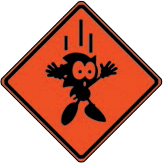 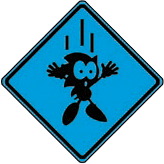