Botanical Kingdom is the second level in the Heroes story in Sonic Riders: Zero Gravity, which is located inside of Monopole's large greenhouses. It is played by Tails against seven SCR-GPs.

The course is set in a forest filled with large vines and palm trees although there are large greenhouse facilities present around the area. Towards the end (behind the starting line), there is a giant hive-like structure.

After Sonic, Tails and Knuckles got away from the pursuing SCR-GP robots, Tails came up with a plan to investigate MeteorTech Premises themselves and see who is responsible behind all this. But suddenly they ran into Amy Rose, who unintentionally slowed the team down. Having retrieved an Ark of the Cosmos, she told them that more robots came after her, when she picked it up. Tails concludes that the robots were after the Ark of the Cosmos and the heroes headed off when the SCR-GP robots finally found them.

The course begins with a high speed loop followed by a ramp which transports racers into a small section of a greenhouse facility where a Wall-Route, a spring and a barricaded path concealing a line of planters (for Bike and Wheel racers to destroy and gain Gravity Points) are present. The Spring lets the player ride on a bee, collecting Rings and an Item Box along the way. After exiting the greenhouse through any route, the course branches into two paths and a catapult leading to an Air Ride section through the center; the left path has a Grind Rail and a spring while the right path consists of a line of planters though they will meet up.

The aforementioned Air Ride, grind rail and spring all lead to the main shortcut of the course although a daring racer may also use a Gravity Dive to reach it. This route leads to an ivy swing that launches racers to another high speed loop and then into a sharp turn requiring Gravity Control. Any trailing racers can use the slipstream paths left by their leading opponents to launch themselves into the air to grab onto a vine to ride along a rotating tree to skip this curve. Regardless, the main shortcut ends with a ramp that transitions racers into the hive section.

If racers do not take the main shortcut, they will instead continue along after passing through a ramp and a loop to find another Grind Rail, and a series of Dash Rings for Air Riding racers which both skip a following sharp turn on this other route. For Air Riding racers to reach this Air Ride section, they must use the slipstream paths left by their leading opponents to launch into the air to reach the first Dash Ring. There is a path of planters for Bike or Wheel Gear racers before the curve. After the curve, a ramp transports the player to the hive section.

The hive section is the final stretch of the course (where all course branches meet). Here, the player can use Gravity Dive and make use of the floating large vines as objects for meteor burst. Leaving the hive finally takes the player back to the start/finish. 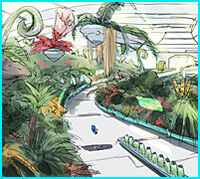 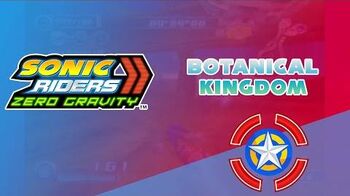