Boss Attack Zone is a Zone exclusive to the Time Attack mode in the 2013 remaster of Sonic the Hedgehog 2. In this Zone, the player must fight all of the eleven main bosses encountered in the game in one go (except for the Brass Eggman).

Boss Attack Zone is initially not accessible in Time Attack until the player completes the game for the first time.

Boss Attack Zone features small segments of each Zone featuring the boss fights as a straight forward run-up to the encounter of the boss. After the boss of the segment is defeated, the player can progress to the next segment by moving to the right, which will transport them to the next boss. Only a few segments contain Rings and/or Monitors that will help the player survive, which are noted as follows:

After defeating the Death Egg Robot, the Death Egg "explodes" but instead of Sonic jumping off into outer space, he simply travels to another section of the Death Egg with a Goal Plate to mark the end of the Zone. 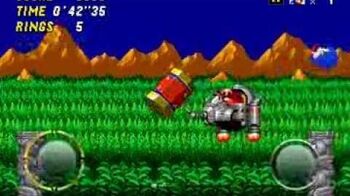