A Boom Boo, from the Wii U version of Sonic Lost World.

The Boom Boo[1] (ブーブ, Būbu?) is an enemy that appears in the Sonic the Hedgehog series. It is a large ghost breed and the servants of King Boom Boo who roam haunted areas.

The Boom Boos look like a normal type Boo, meaning they have white round bodies with thin hands and two small sharp ends below their body. For facial features, they have black soulless eyes and a closed linear mouth which looks like it is knitted up. However, the Boom Boos are about three times larger than the regular Boos.

When shrunk down in Sonic Adventure 2, the Boom Boos' appearance changes to that of an attack-type Boo. As such, they gain red and orange colored maniac eyes with black pupils and their mouth opens, revealing black, sharp teeth. They also gain three points on their hands and the two ends below their body are transformed into one.

In gameplay, the Boom Boo's only means of attacking the player is by slowly moving towards the playable character when in sight. When making contact, they will cause damage. To defeat a Boom Boo, it must be attacked three times: hitting it once will cause it to shrink down to a large attack type Boo, hitting it twice will turn it into a regular attack type Boo, and hitting it a third time will defeat it. Defeating a Boom Boo will award the player with three hundred points. It should be noted that hitting Boom Boos with thrown objects will not affect them.

In the Wii U version and PC version of Sonic Lost World, the Boom Boos and Boos appear exclusively in Sky Road Zone 4. In this game, the Boom Boos are indestructible obstacles that move left or right across the screen in rows with normal Boos, and cause damage when touched. The player has to avoid them using the Magenta Rhythm Color Power.

In Team Sonic Racing, the Boom Boos appear as traps on the Boo's House track.

The Boom Boos have the ability to levitate and move through midair. As ghosts, they possesses a spirit physiology that causes them to evaporate when they takes too much damage when tangible. However, they have much more physical durability than a regular Boo and when hurt they will shrink down a size instead of evaporating. However, they can only shrink down to a certain size before evaporating.

In both the Sonic X anime series, a Boom Boo is created by the merging of several Booms. It only appeared in "Sonic's Scream Test", where the Booms formed a Boom Boo to battle Amy, only to be swiftly taken out by the female hedgehog. 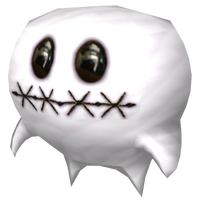 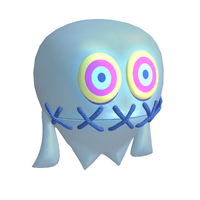