For the creature in Sonic X, see Boom.

A Boo, from Sonic Runners.

The Boo[1] (ブー, Bū?) is an enemy that appears in the Sonic the Hedgehog series. It is a breed of ghost who inhabit haunted areas and are the servants of King Boom Boo.

Boos typically have white round bodies. Normal Boos have black, soulless eyes, knitted up mouths, small thin hands, and two small sharp points on their bottom which resemble legs. Attack type Boos are larger and have red and orange maniac eyes with black pupils, sharper hands with three pointy fingers and the ends on their bottom have merged into one. Their mouths are also opened, revealing sharp black teeth.

In this game, there are two types of Boo: ones with black eyes (normal type) and ones with red and yellow eyes (attack type). Normal Boos are harmless and scurry along the ground, but will also hide in gravestones, pumpkins, and even just in the ground. When approached, these Boos will pop up in the playable character's face to feign an attack. This does not inflict damage, but can briefly stun the playable character. After a while, the Boo will disappear, although the player will not earn any points.

Unlike normal Boos, attack type Boos can hurt the player like regular enemies. These Boos will float around normally until they spot the player and will start chasing them down. Should they reach the playable character, they will either hold them in place for other enemies to attack them, or attack directly. While just touching an attack type Boo will damage the player, defeating one will grant the player three hundred points.

Throwing objects at these enemies will not affect on them, and when defeated in battle, the Boos release neither Animals or Chaos Drives

In the Wii U version and PC version of Sonic Lost World, both the Boos and Boom Boos appear exclusively in Sky Road Zone 4. In gameplay, the Boos are indestructible obstacles that move left or right across the screen in long rows and cause damage when touched. The player has to avoid them using the Magenta Rhythm Color Power.

During the "Halloween" event, the Boos were being brainwashed by Dr. Eggman, who fed them a special candy. A Boo thus aligned itself with Rouge the Bat and E-123 Omega to stop Eggman. When Team Sonic joined the mission, the Boo helped guide the team to Eggman hideout. During the showdown with Eggman and the enslaved King Boom Boo, the Boo then brought Omega a searchlight in accordance to Rouge's orders, which Omega used to restore King Boom Boo to normal.

In Team Sonic Racing, the Boos appear in Boo's House. When racing along this track, the player can see them in the background, especially inside the track's signature long corridor with columns. Inside the corridor room in particular, the Boos will from time to time appear between two columns where they will jump upward. Afterward, they will disappear and create a pink wall of flames between their two columns which deals damage to all racers who pass through it.

Similar to their king, the Boos are mischievous and malicious, giggling whenever they cause misdeeds. While normal Boos are rather passive, attack type Boos are much more energetic.

The Boos have the ability to levitate and move through midair. As ghosts, they can turn themselves invisible and possess a spirit physiology that causes them to evaporate whenever they take too much damage while tangible.

Boom Boo is large variation of Boos who also first appears in Sonic Adventure 2. Boom Boos look identical to normal Boos, but are able to evaporate three times larger after taking damage or shrink down after being defeated and eventually become attack-type Boos.

In the anime series Sonic X and its comic series published by Archie Comics, the Boos are called Booms. In this media, they are a breed of ghosts from Earth who haunt an ancient castle and the minions of King Boom Boo. They first appeared in "Sonic's Scream Test" where they accidentally released into the living world. However, Sonic and his allies were able to save their victims and reseal them.

The Boos would later return in the Sonic X comics to help King Boom Boo escape into the living world by possessing people. However, they were convinced to return to their eternal resting place. 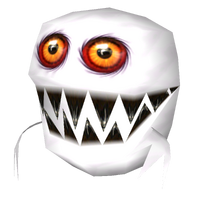 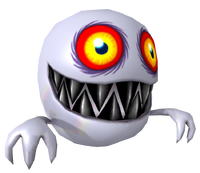