A Bomb Wing in Eternal Engine.

The Bomb Wing[1] (ボムウイング, Bomuuingu?) is a robot deployed by the military organization Guardian Units of Nations, and a part of Beetle series. It is essentially a modified version of the Bomb Beetle.

The Bomb Wing attacks by strafing, dropping exploding bombs while passing by in a fixed trajectory. In terms of movements, the Bomb Wing appears from a distance to the player and then flies toward the screen while dropping its bombs.

The bombs it drops are smaller in size than those of the Bomb Beetle, the top part and the bottom part of it are red in color and has a grey color on its left. The bombs also have a smaller explosion radius. 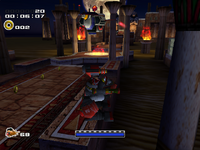 A Bomb Wing in Sand Ocean.