The Bomb Pawn (ボムポーン, Bomupōn?) is an enemy that appears in Sonic Chronicles: The Dark Brotherhood. It is a model of Badniks which was locked up in Eggman's Hazard Vault because it was too dangerous.

The Bomb Pawns were created by Dr. Eggman, but were stored away inside the Hazard Vault in Metropolis because they were uncontrollable and too unstable. When Angel Island fell down into Metropolis at the end of chapter 5, it opened up the Hazard Vault, releasing the Bomb Pawns, along with other robots and sending them rampaging through the ruined city streets.

The Bomb Pawns can only be encountered in Metropolis Ground Zero. Their basic attack is shooting bombs from their torso at the opponent, which deals Blast damage. Their POW moves are Charging and Super Bomb (スーパーボム, Sūpābomu?), which can inflict stun. 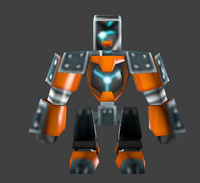