A blue spring and an action pad.

The blue springs look very similar to regular springs, but are primarily blue and have a yellow star on top of them.

On the Xbox 360/PlayStation 3 version, all action pads for a blue spring besides those marked with a question mark depict the button the player needs to press when standing on them (which is also shown on the screen during the Real-Time Interaction). The action pads on the Wii/PlayStation 2, however, are blank. 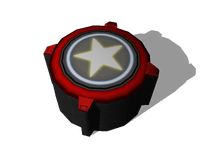 A leftover model for the action pad in Sonic Colors.
Add a photo to this gallery