The Blue Star II (ブルースターII, Burūsutā II?) is an object that appears in the Sonic the Hedgehog series. It is a Board Type Extreme Gear that was created by Robotnik Corp. and acquired by Tails for Sonic to use at the climax of the first World Grand Prix.

The Blue Star II was adquired by Tails prior to the finals in the EX World Grand Prix, when Sonic's original Extreme Gear was destroyed by a bomb Wave the Swallow had planted on it prior. When Dr. Eggman stole the Key to Babylon Garden and headed to Babylon Garden to claim its treasure, Team Sonic pursued the doctor.

When the doctor was located, Sonic was about to follow him on foot when he was given the Blue Star II by Tails, saying that he had prepared it in case something like this happened. Thanking Tails for the new Extreme Gear, Sonic used it to pursue Eggman. As the same time, Sonic met Jet the Hawk, who was after the doctor as well. Seeing this as a rematch for the finals, Sonic engaged Jet in a race to the doctor with the Blue Star II, and eventually claimed victory.

The Blue Star II was built by Miles "Tails" Prower (though according to its profile, it was produced by Robotnik Corp.). It is especially made for the Speed Type. It is unlocked in the game after Sonic defeats Jet the Hawk at Babylon Garden in the Heroes Story in Story Mode.

As a Board-type Extreme Gear in Sonic Riders, the Blue Star II is well-balanced in its attributes with average statistics, an average rate of fuel-consumption and is suited for general riding. 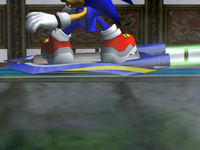