A blue Board type Extreme Gear.

The Blue Star (ブルースター, Burū Sutā?) is an object that appears in the Sonic the Hedgehog series. It is a Board Type Extreme Gear that was originally created by Robotnik Corp. and then customized by Tails for Sonic to use.

Specifically made for airboarding, the original Blue Star was destroyed in a heated climactic race in Sonic Riders. The Blue Star II replaced its predecessor as a stronger upgraded sleek ride.

Sonic might be new to boarding, but on the blue star board, which he can only ride, he's a tough competitor for the pros. This board was produced by Robotnik Inc. Specifically for Sonic.

The Blue Star first appeared in Sonic Riders, where it was customized by Tails (though, according to its profile, it was produced by Robotnik Corp.). The Blue Star is especially made as an Air board for the Speed Type. It is only useable to Sonic in this game.

The Blue Star in Sonic Riders is designed as a metal-plated blue hover board with a yellow stripe ringing around it and a grey foot panel with striations.

As a Board-type Extreme Gear in Sonic Riders, the Blue Star is well-balanced in its attributes with average statistics and an average rate of fuel-consumption and is suited for general riding. Its stats makes it a powerful and "easy-to-master" Gear, but its one equalizer is that its corner skills leave something to be desired. Like most other personal Extreme Gears, the Blue Star does not possess any unique abilities.

In Sonic Riders, the Blue Star was customized by Tails especially for Sonic to participate in the EX World Grand Prix. When Wave met with Team Sonic after the first race, she put an explosive device on it, realizing this board could be her group's downfall. While doing so, she mocked it as a "piece of junk" then walked away. Later on, while Sonic and Jet were proving who is the fastest in the final race and lap of the Grand Prix, she detonated it, seeing that Jet was losing the race while Sonic was inches away from the finish line. The bomb exploded successfully and the Blue Star was destroyed, sending Sonic flying into the ground, while Jet claimed the victory.

The Blue Star made a reappearance in Sonic Riders: Zero Gravity. According to its profile, it has been re-engineered by Tails, with new sleek curves attesting to its improvements. Its somewhat powered updated stats blazes in as Sonic's own personal ride once again. It is only useable to Sonic in normal races, but is usable to all characters (except Dr. Eggman) in Survival Relay.

In Sonic Riders: Zero Gravity, the Blue Star underwent a significant redesign. In this game, it resembles a sleek blue "T" with two circular silver-colored foot panels on the top, with an silver-colored area between them. Also, around the foot panels, along the front and on the rear, it have as well white areas and a green streak running across it with two orb-like exhaust ports built in the back.

As a Board type Extreme Gear in Sonic Riders: Zero Gravity, the Blue Star is well-balanced in its attributes with average statistics, and is suited for general riding. Like most other character-exclusive Extreme Gears, the Blue Star does not possess any unique abilities of its own.

The Blue Star made another reappearance in Sonic Free Riders. According to its profile, Tails customized the Blue Star especially for Sonic to put all of his physical skills into its performance. It is only useable to Sonic in normal races, but is usable to all characters (except Dr. Eggman and Vector) in Relay Race).

In Sonic Free Riders, the Blue Star received once again an updated design. In this game, the Blue Star returns to being more board-like in shape like in Sonic Riders, but with a more sturdy look, though it maintains a more sleek design. It keeps its trademark blue color in this game, but has also received wide white accents on its edges and black components on its bottom.

As a Board type Extreme Gear in Sonic Free Riders, the Blue Star is, like in Sonic Riders: Zero Gravity, well-balanced in its attributes with average statistics and is suited for general riding.

Like in the two previous titles, the Blue Star possesses no unique abilities of its own, but it can be equipped with two Gear Parts.

In the Nintendo 3DS version of Sonic Generations, the Blue Star makes a small cameo appearance alongside Sonic on a bonus artwork in the Collection Room.

The Blue Star II is the successor of the Blue Star, built by either Robotnik Corp. or Tails during the first World Grand Prix. It is basically an upgraded model of the first Blue Star, with greater speed but worse maneuvering.

In the Sonic the Hedgehog comic series and its spin-offs published by IDW Publishing, the Blue Star makes an appearance as an Extreme Gear used by Sonic. Its past is virtually identical to its game counterpart's, up until after the events of Sonic Forces. It was first seen being used during the battle for Angel Island. 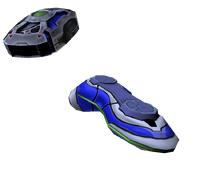 3.75-inch Sonic figure with the Blue Star by Jazwares. 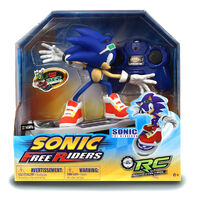