They may teleport out of the way, but are generally there to be walloped.

The Blue Ma Djinn (ブルー・ジン, Burū jin?, lit. "Blue Djinn")[1] is an enemy that first appeared in Sonic and the Secret Rings. It is an evil djinn breed originating from the world of the Arabian Nights and some of the Erazor Djinn's henchmen.

The Blue Ma Djinns are larger than Green Ma Djinns but smaller than Red Ma Djinns. They mostly resemble humanoid specters with streamlined bodies and no lower body or neck. Their bodies are mostly black with shades of purple on their large forearms and lower body, an iris forehead, and pale yellow drawings for a face and flames on their large forearms. They also have a green gem in their chest with an iris coloration around it that resembles a shirt with golden outlines, grey knobs for ears, a tuft on top of their head, and mittens for hands. For attire, they have grey bands on their wrists and lower torso. Depending on their location, the Blue Ma Djinns wear additional attire:

The Blue Ma Djinns first appeared in Sonic and the Secret Rings. They are diverse in origin, but they all share the common characteristic of being driven to madness during the events of the game. Some appear to have been regular inhabitants,[2] others were evil spirits sealed away long ago by King Solomon,[3] and the rest were created by the Erazor Djinn from the words he carved out of the Arabian Nights.[4][5] Regardless, they were all recruited into Erazor's personal army and used to attack the world of the Arabian Nights in his search for the World Rings.

The Blue Ma Djinns are some of the most common enemies in the game and can be found in every World. In gameplay, they do not normally attack and remain in stationary positions, though they can still inflict damage should the player touch them. On some occasions through, they will perform a spinning attack. They can be defeated with a single hit, and when they are, they release Pearls.

In Sonic Rivals 2, the Blue Ma Djinns appear as one of the collectible cards in the game. To obtain it, the player has to get an S Rank in Sunset Forest Zone Act 3.

The Blue Ma Djinns are able to levitate and can fly through midair. They are also capable of teleportation. 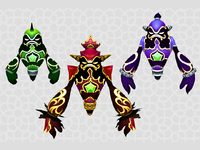