The Blue Falcon, from Shadow the Hedgehog.

— The Blue Falcon, Shadow the Hedgehog

LZ-12R/Blue Falcon is a vehicle that appears in the Sonic the Hedgehog series. It is a large, hovering, battle mech used by the Guardian Units of Nations, being the same model as the Heavy Dog.

It wields an area-of-effect particle beam cannon and several rocket launchers on its side, which can be broken off and used against it.

In Shadow the Hedgehog, the Blue Falcon appears after Shadow reaches the center of the Space Colony ARK on Doom's Eye's order. It is used by a GUN Soldier in an attempt to stop the hedgehog from reaching the Eclipse Cannon.

The Blue Falcon in The ARK, from Shadow the Hedgehog.

The Blue Falcon is the boss of both the Dark and Normal missions of The ARK in Shadow the Hedgehog. The guide for this battle is Doom's Eye.

This battle is similar to Heavy Dog. The player can switch between two platforms: one upper and the other lower. To dodge Blue Falcon's particle beam cannon, the player must move opposite the platform they were originally standing when the charge is completed. If Shadow is on the lower platform the canon is not fired until he goes to upper platform or changes his height. When underneath the Falcon, it will continuously drop bombs onto the lower platform, so the player must keep moving. To defeat it, Shadow must use homing attacks which not only damage it but also break its rocket launchers down so he can use them against GUN mobile. Using Chaos Blast gives the player a chance of getting an A-Rank. 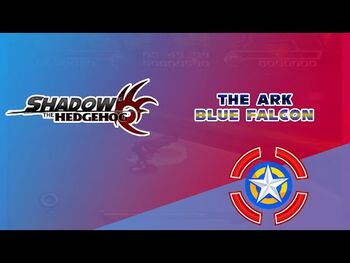 "ARK to Headquarters. ARK to headquarters. Come in! Come in! Shadow's penetrated the ARK. He's headed toward the control room of the Eclipse Cannon."
—The Blue Falcon, Shadow the Hedgehog