Sonic as the Blue Cube, from the Wii version of Sonic Colors.

Change forms with a Blue Wisp for the Cube form to swap out Blue Rings!

The Blue Cube (ブルー・キューブ, Burū kyūbu?), also known as the Cube form, is a transformation that appears in the Sonic the Hedgehog series. It is the Color Power gained by absorbing a Blue Wisp and its Hyper-go-on, which turns the user into a cube with environment-altering effects.

When using the Blue Cube, the user transforms into a perfectly shaped blue cube. In Sonic's case, his version of the Blue Cube has several vertical and horizontal straight recesses on his surface and on one side, his eyes and ear canals can be seen, albeit they are now yellow and have straight outlines.

The Blue Cube made its first appearance in the Wii version of Sonic Colors, and later in its remaster Sonic Colors: Ultimate. In this game, it can first be used in Starlight Carnival Act 1. When utilizing the Blue Cube in gameplay, the user only turns into the Blue Cube when utilizing this form's powers, unlike most other Color Powers. In gameplay, when using the Blue Cube's powers, the playable character unleashes shockwaves that can destroy all enemies (first by launching them into the air and then destroying them) and otherwise destructible obstacles on-screen, though things such as Wisp Capsules remain unharmed. Using the Blue Cube near Blue Rings will likewise turn them into Blue Blocks and vice versa. This way, the player can create new platforms from Blue Rings, which the player could not walk across earlier because they were intangible Blue Rings, or get through passages blocked by Blue Cubes by turning them into intangible Blue Rings.

When using the Blue Cube in gameplay, the player has the following controls:

To use the Blue Cube in gameplay, the player has to press

while in possession of at least one Blue Wisp. Releasing the button will make the playable character deploy a manifestation of the Blue Cube on the race track (similar to the Blowfish) to serve as an obstacle for other races. Colliding with a Blue Cube will cause a racer to take damage and spin out for a few moments. The Blue Cubes can either be thrown ahead of the user in an arc or dropped directly behind the user, and will remain on the race tracks for the entire duration of the race until someone collides with them or destroys them with an Item Box power-up, such as the Orange Rocket or Crimson Eagle. If played right, the Blue Cube can even be used to defend against inbound projectile-based Color Powers.

When transformed into the Blue Cube, the user can send out powerful shockwaves across the vicinity by slamming into the ground, which have different effects on the objects in the area. Enemies and troublesome obstacles caught in the shockwaves are hit with such force that they are blown apart, while Blue Rings will turn into Blue Blocks and vice versa.

The Blue Cube's only known weakness is that it can only be used for a few seconds and requires more Hyper-go-on from Blue Wisps to be maintained. 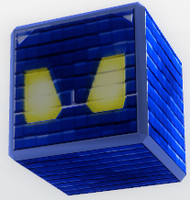 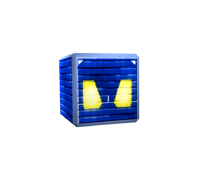