For the location in the Archie Comics, see Blue Coast Zone (Archie).

Blue Coast Zone is the first Zone in Sonic Rivals 2. The level is set in what appears to be an old, ruined water palace of sorts, resembling the Water Palace from Sonic Rush. The course features many traditional elements, such as loops and grind rails.

Sonic asks whether Knuckles and Rouge are dating and only knows that the echidna has lost the Master Emerald again. Without surprise, Sonic takes off to get to Eggman. Meanwhile, Rouge would tell Dr. Eggman that Sonic and Tails are looking for him, much to Tails' dismay.

Knuckles encounters Sonic which the hedgehog jokes whether Knuckles and Rouge are on a date. Knuckles gets serious and asks if Sonic has seen Eggman as the Master Emerald has gone missing again. Not too surprised, Sonic proceeds to finding Eggman first, leaving Knuckles to following him. Meanwhile Rouge plans to tell the doctor that Sonic and Tails are looking for him much to Tails' dismay.

Once again, Shadow is vary of Silver's intentions while Metal Sonic, under the orders of Eggman proceeds to stop Espio.

Metal Sonic, under the orders of Eggman proceeds to stop Espio while Shadow, once again is vary of Silver's intentions.

The boss of Blue Coast Zone is the Egg Liner, a reversing vehicle with a spiky ball on a spring at the front. Dr. Eggman (Eggman Nega in disguise) will prepare for an attack by raising the spiky ball leaving the front exposed, when he does this, you must knock back your rival and strike it before it can launch it's attack. The Egg Liner will also move the ball diagonally preparing to attack straight forward which must be avoided by jumping over it. Your character has to hit it a total of six times in order to defeat it. Once defeated, the contraption will be blown up, leaving Eggman (Nega) to escape in his Egg-o-matic.

In order of card collection map:

In the Sonic the Hedgehog comic series and its spin-offs published by Archie Comics, the Blue Coast Zone is a location on Sonic's World and lies in the region of Apotos. 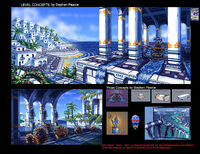