to get through the flames and get to the goal in time.

I'll put out that ball of fire!

Blaze: Piercing the Flames is the fourth Challenge Act of Crisis City Act 2 in the console/PC version of Sonic Generations. It is unlocked after clearing every Stage in the modern era and is playable only as Modern Sonic.

This Challenge Act is a modified version of the first section of Crisis City Act 2. It includes more bridges with damage-inducing lava pools and walls of flames to ensnare the player's path. There are also many more Iblis Takers, Iblis Biters, and Iblis Worms, all of which attack with more ferocity.

In this Challenge Act, the objective is to reach the Goal Ring at the end of the course. To reach it, the player must make use of Blaze the Cat which the player can summon anytime with

. Along the way, the player's path will be obscured by walls of fire or Iblis's Minions. To get rid of them, the player can make Blaze extinguish the flames and take out enemies by summoning her.

The first and second sections of this Challenge Act are nearly identical to the original Stage, although the player will enter a new area in the stage. It is advised that Blaze is used here in order to take down obstacles while proceeding onward. Eventually, the player will have to climbs some steps and cross lava pits. The easiest way to do this is to Homing Attack across several Iblis minions. At the final platform, there will be lots of enemies and walls of fire that must be removed before the Goal Ring can be reached.

Blaze at the beginning of the challenge.

Blaze after the player completed the challenge.
Add a photo to this gallery 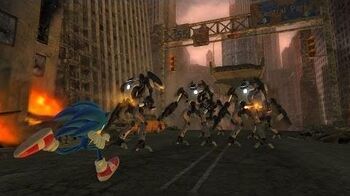