For other uses, see Blaster (disambiguation).

The Blaster, from the Wii U version of Sonic Lost World.

The Blaster[1] (ポンポン[2], Pon-Pon?) is an enemy that appears in the Sonic the Hedgehog series. It is a mass-produced, beetle-based Badnik model created by Dr. Eggman which can fire different types of projectiles from their mounted cannon.

Blasters appear to be based on Hercules beetles. With a bulky brown and gray armor, Blasters possess a pair of tracked wheels underneath their body. The classic Blasters also have a long and straight cannon on their forehead as a horn.

In Sonic Lost World, the Blasters' design was simplified. Their horn was in particular redesigned as a male rhinoceros beetle horn, albeit with bisecting ends, although it still had a barrel hole in-between the horn ends.

In Sonic & Knuckles and the lock-on game Sonic the Hedgehog 3 & Knuckles, Blasters appear in Flying Battery Zone, where they slowly roll around. When the playable character comes near, they start firing sparkling projectiles at them, one at a time. However, these projectiles will harmlessly bounce off of any shield type. The Blasters will keep shooting until the player either defeats them or moves further away.

Along with Technosqueeks, Blasters can also be found hiding inside Capsules or pulled up by electricity bars on the ceilings in Flying Battery Zone Act 1. A Spin Jump or Spin Attack can easily defeat this Badnik. Also, upon their destruction, each Blaster will release an Animal.

In the Wii U version and PC version of Sonic Lost World, Blasters appear in Desert Ruins Zone 2. Here, they are found moving backwards on routes where the player is obligated to go at high speed. Instead of shooting projectiles though, they shoot honey at the screen, temporarily obscuring the player's vision. Otherwise, the Blaster can be defeated with a Spin Jump or Homing Attack. Also, upon a Blaster's destruction, it will release an Animal.

Blasters are equipped with a forehead-mounted gun that can load and fire different projectiles, be it energy blasts or honey. The models that surfaced during the Lost Hex incident have also demonstrate the ability to move at extreme speeds.

In the Sonic the Hedgehog comic series and its spin-offs published by IDW Publishing, the Blasters are Badniks created by Dr. Eggman. Their past is virtually identical to their game counterparts', up until after the events of Sonic Forces. 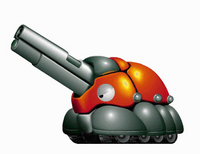 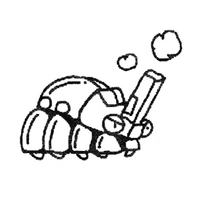