People like us don't belong anywhere else. All we have is each other. Especially now.

Blade is a character that appears in the Sonic the Hedgehog comic series and its spin-offs published by Archie Comics. She is a mobian shark, a member of the Pirates of the Setting Dawn, and Razor the Shark's older sister.[1]

Blade is a red mobian shark, whose size and proportions closely align with her brother's. She has dark gray eyelids, a light red muzzle, and gold eyes. The ends of her fins are also black.

Her attire consists of a gold headband, a gold belt, and a black and gold leotard.

Sometime ago, Blade and her brother Razor once tried to steal pirate treasure from the Knives but were caught by a rough-crowded pirate crew.[1] The pirates decided to let the pair join their ranks, though they were eventually betrayed by former captain Abyss the Squid, who had joined the Eggman Empire to form a new pirate crew. Later, a "philosophical disagreement" between Razor and his crewmates saw the former being cast into the sea, and separated from his sister.[2]

At some point afterwards, Blade and her crew encountered Princess Undina, who they apparently recognized, kidnapped, and held for ransom.[3]

Sometime later, Razor, along with Echo the Dolphin of the Meropis City Guard and the Chaotix, had been captured by Blade's crew, and brought aboard their ship.[3] After a tense few moments between the two parties, Razor and the others decided to join Captain Shellbreaker. Later, though they squabbled some first, Blade admitted that she was content with Razor's decision to return. That night, she warned the Chaotix not to snore in their sleep, threatening to inflict harm upon them if they did.[1]

Focused, confident and with a temper as fierce as her natural color, Blade seems to share many of her brother's traits, including being intimidating, cold, blunt, and solemn. She is not above threatening others, even her own shipmates, with violence, as seen when she warned the Chaotix not to snore in their sleep.[1]

As an aquatic mobian, Blade is capable of aquatic respiration, allowing her to breathe both on land and underwater. 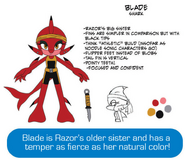 Retrieved from "https://sonic.fandom.com/wiki/Blade?oldid=1983365"
Community content is available under CC-BY-SA unless otherwise noted.