Sonic News Network
Register
Don't have an account?
Sign In
Advertisement
in: Foxes, Sonic and the Black Knight, Alternate doppelgängers,
and 4 more
English

The Blacksmith, from Sonic and the Black Knight.

Sonic and the Black Knight
(only appearance)

I know a fine blade when I see it. I am a Blacksmith, after all.

— Smithy, Sonic and the Black Knight

The Blacksmith (鍛冶屋, Kajiya?) is a character that appears in the Sonic the Hedgehog series. He is an anthropomorphic fox cub and the alternate reality doppelgänger of Miles "Tails" Prower from the world of Camelot. As his name implies, he works as the blacksmith in Camelot Castle where he aids adventurers by forging new weapons or helping them hone their skills.[1]

The Blacksmith is essentially a doppelganger of his mainstream counterpart. As such, he is a young, anthropomorphic fox cub with a unique genetic mutation giving him two tails instead of one. He has mostly amber fur with white fur around his muzzle with cheek tufts, front torso with fluffy fur on top of his chest, and the tips of his tails. He also has sky blue eyes, large triangular ears with white canals on top of his head, a small black nose, and three locks of hair on his forehead.

For attire, the Blacksmith wears a cream, long-sleeved shirt, a blue vest, and a brown leather apron with two silver buttons and his personal insignia embedded on the front (which resembles Tails' logo on his various Tornado-derived planes). He also wears goggles with violet lenses, gold frames and brown straps on his forehead, a regular white glove on his right hand, a turquoise mitten glove with yellow cords on his left hand, and red shoes with white toes and soles and gray metal bands around his ankles.

In Sonic and the Black Knight, while in his shop in Camelot Castle, the Blacksmith encountered Sonic the Hedgehog after he brought his sword, Caliburn, to him so he could have it sharpened before meeting with Nimue. The Blacksmith quickly took an interest in Caliburn, especially after discovering that it could talk. While the Blacksmith was intrigued, Sonic deflected his questions, telling him that he was in a hurry and the Blacksmith did not press the matter. He quickly managed to reforge Caliburn, which allowed Sonic to use his Soul Surge.

Like his mainstream counterpart, the Blacksmith is friendly, kind, and enjoys helping others.

The Blacksmith possesses a pair of twin-tails which he can use to achieve flight by twirling them around like rotary blades, allowing him to lift himself off the ground and fly around in mid-air like a helicopter.

The Blacksmith is a proficient metalsmith who can come up with unique creations and judge a good blade just by sight.[1] His craftsmanship is unmatched and is said to be the best in all the land.[1][2]

Unlike the knights of the land who uses swords, the Blacksmith wields a large and light blue slingshot. In battle, he uses it to shoot explosive balls at his opponents and can use it in both rapid succession and over great distances. 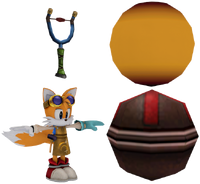