A Black Wisp, from the Wii U version of Sonic Lost World.

The Black Wisp (ブラックウィスプ, Burakku Wisupu?) is a creature that appears in the Sonic the Hedgehog series. It is a breed of Wisp that grants the Black Bomb Color Power.

The Black Wisps have a red jagged mouth-like recess stretching across their heads. Stemming from the bottom of their heads, they have three round tentacles with a slight rounded point at the end of them. They also appear to have two round and puffed cheeks on the sides of their heads.

Being Wisps, the Black Wisps are bright, energetic, and pure of heart. Due to their overall good nature, they easily get along with everybody, except bad guys. Also, rather than aliens, with their floaty movements, they are more like fairies.[1]

The Black Wisps are able to levitate in midair at will, which serves as their main method of transportation.

The Black Wisps are able to generate and store their own unique variant of a powerful energy known as Hyper-go-on inside their own bodies, which is their life source. It is unclear to what extent they can use their own Hyper-go-on.

The Black Wisps made their first appearance in the Wii U version of Sonic Lost World. In gameplay, the Black Wisps appear as Item Box power-ups that enable the Black Bomb.

Unlike other Wisps, the Black Wisps are only available in Sonic Lost World by obtaining them from the Miiverse. They can also be rewarded by completing the NiGHTMARE Zone or the Yoshi's Island Zone.

In Sonic Forces: Speed Battle, Black Wisps can be spotted along the sides of the racetracks on Planet Wisp.

In Team Sonic Racing, the Black Wisps appear as Item Box power-ups on the game's race tracks. On a few occasions, the player is able to obtain and hold up to three Black Wisps at once. In gameplay, the Black Wisp power-ups allow the user to throw manifestations of the Black Bomb on the race track, which can explode in the face of rival racers.

In the comic tie-in, a Black Wisp was used by Shadow to attack Sonic during their teams' race on Planet Wisp. Another Black Wisp was soon after used during the same race by Omochao as a part of a collaboration attack on Dr. Eggman, who had intruded on Team Sonic and Team Dark's race.[2] 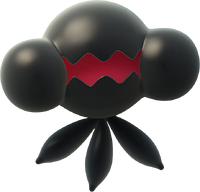