The Black Shot first appeared in Sonic Riders: Zero Gravity. According to its profile, it is a speed model produced by Accevice Corp, and is pared down for maximum velocity. It is unlocked in the game, alongside Shadow, by completing the Heroes Story in Story Mode. It is only usable to Shadow in normal races, but is usable to all characters (except Dr. Eggman) in Survival Relay.

The Black Shot's design in Sonic Riders: Zero Gravity, like most other Board types presented in the game, bears a distinct resemblance to that of a regular board in terms of shape, but thicker and smoother. It is colored dark metal grey, with white highlights running along the sides and on the front, along with an additional red stripe on the outmost front. On its rear, it possesses three exhaust ports, all with red and white highlights on them, that are arranged in a triangle. It also has two foot pads on the top surface, with a black area between them.

As a Board type Extreme Gear in Sonic Riders: Zero Gravity, the Black Shot is well-balanced in its attributes with average statistics, and is suited for general riding. Like most other character-exclusive Extreme Gears, the Black Shot does not possess any unique abilities of its own.

The Black Shot reappeared later in Sonic Free Riders. According to its profile, it is a speed-heavy model produced by Accelovice and customized by Shadow himself for better performance. It is unlocked in the game, alongside Shadow, by completing Team Heroes' and Team Babylon's stories. It is only usable to Shadow in normal races, but is usable to all characters (except Dr. Eggman and Vector) in Relay Race.

In Sonic Free Riders, the Black Shot underwent a redesign. In this game, its shape is changed slightly, giving it more recognizable board-like dimensions. It is primarily colored black, with white recesses along the edges, along with glowing orange recesses at each side of the rear, and white accents on the front and rear that extend slightly over the surface. It is also decorated with two red flames that each cover almost half of the Black Shot's upper surface, with a yellow arrow between the flames.

As a Board type Extreme Gear in Sonic Free Riders, the Black Shot is, like in Sonic Riders: Zero Gravity, well-balanced in its attributes with average statistics, and is suited for general riding.

Like in Sonic Riders: Zero Gravity, the Black Shot possesses no unique abilities of its own, but it can be equipped with two Gear Parts. 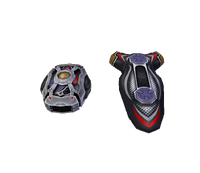