The prices are listed in parenthesis. The chance of these items appearing can be random.

The name of the shop derives from the term of the same name, which is used to describe a type of business that deals either in shady business dealings or supplies contraband/illegal items. The fact that it is located inside a locker indicates that the Chao selling the items was a shady character. 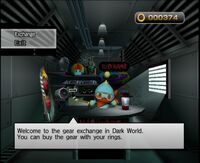 The Black Market in Sonic Riders.

The Black Market in Sonic Riders: Zero Gravity.
Add a photo to this gallery