A Black Hawk, from Shadow the Hedgehog.

Flying creature that spits laser fire; some can be used as a flying mount (gold-armored versions are called Black Volt).

The Black Hawk[1] (ブラックホーク, Burakku Hōku?) is an enemy that appears in Shadow the Hedgehog. It is a small winged Black Arms which is much stronger than the Black Wings.

Black Hawks have a squamous black hide with wide red lines from their head to the end of their back fins.

Black Hawks are more powerful than the Black Wings, being capable of firing blue energy waves by tilting and rushes themselves, and flying unhindered in space.[2] They take three hits with the Homing Attack to be defeated.

The Black Hawks can be used as a flying vehicle after being defeated. To get on one, the player has to press

to speed it up.[4] Note that their shots cannot be triggered by the player. However, Shadow can use a weapon while riding one by pressing

, excluding melee weapons as Shadow discards them once mounting the Black Hawk.

Each Black Hawk has a health measure that depletes whenever it takes damage, until it empties, leaving the player to fall into a bottomless pit.[5] Its health measures can be refilled using Damage Recover. The pilot of the Black Hawk cannot ride it indefinitely though, meaning that it will leave the player in some parts of the Stages. Sometimes, the Black Hawks also appears in groups as a game mechanic to reach other areas using the Homing Attack. 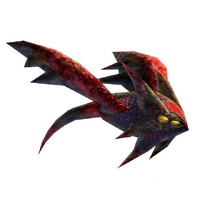