Now I will show you just how pitiful you inferior life forms are!

Black Doom is a boss in Shadow the Hedgehog.

In the shielded bunker where GUN is making its last stand, Shadow could atone for his wicked ways at the last minute by helping Rouge snatch the pink Chaos Emerald out of the Black Arms' grasp. Travelling with his army on the final push against the humans, Doom is quite angered by his impromptu treachery and confronts Shadow for his mutiny; the black hedgehog explains that he will be the one to possess all the Emeralds, not anyone else. Black Doom now intends to personally teach him a lesson. After taking down the Arms' prophet-leader, a weakened Black Doom promises that the Black Arms aren't finished. In the most grandiose one-up of all time, Shadow retorts by announcing that he will use the power of the seven Chaos Emeralds to conquer the entire universe to take his rightful place as the ruler of all.

Mind still in turmoil after the Commander's accusations, Shadow disregards Doom's Eye and instead helps Vector to find the ARK's computer room. Inside the core, Black Doom appears in person, chastising Shadow for blatantly ignoring his previous orders and explains to Shadow that the Commander was telling the truth: the Ultimate Lifeform was created with Doom's genetic material, and it was Project Shadow that prompted GUN's attack on the ARK five decades ago. Shadow announces that he will atone for his crimes and accept humanity's punishment, but Doom accuses Shadow of allowing himself to be brainwashed, and attacks, determined that no creation of his shall surrender to the justice of the weak. Shadow emerges victorious and gathers all seven Chaos Emeralds. A crippled Black Doom promises that his forces will rise again, but Shadow ignores him and makes a despondent monologue concerning himself as a disastrous military experiment that never should have been initiated. As Shadow sadly trudges off, Vector makes a feeble attempt to cheer him up, raising the possibility that Shadow has misidentified his origins, but Shadow ignores him.

Reaching the center of the Black Comet, Sonic and Shadow burst into Doom's inner sanctum, where the alien is bunkered down with the pink and red Chaos Emeralds. Shadow announces that he will honor his promise to Maria Robotnik and save the planet; Doom counters that his efforts are futile, as the Black Arms are not merely superior, but perfect life-forms. One hard-fought battle later, Doom's hyperbole is shown as just that, and the black hedgehog resolves to use the Emeralds' power to defeat all the Black Arms' forces in order to fulfill the promise of protecting the planet Maria loved so much.

Black Doom is fought after the player completes the Hero mission of Final Haunt, Cosmic Fall, or GUN Fortress. The potential guides for the battle are Sonic, Vector and Rouge.

Black Doom has three main attacks he uses randomly that the player has to watch out for:

As Black Doom loses health over the course of the battle, he will start to leave simulacrums of himself behind to fire additional attacks at Shadow before he attacks himself. The only time he is vulnerable to attack is when he is conjuring his attacks or just afterwards, leaving only a small window to damage him before he goes invisible and teleports to another spot on the battlefield to launch his next attacks. He is usually vulnerable to three hits in a row before vanishing, usually from Homing Attacks, or gunfire depending on the strength of the weapon Shadow is armed with. Find weapons in the corners of the room as soon as possible, because there will not be much time to defeat him. Once Shadow activates his Hero/Dark powers, he can use the infinite ammo granted to him by it to attack Black Doom more often and possibly finish him off in one attack before he can teleport again. 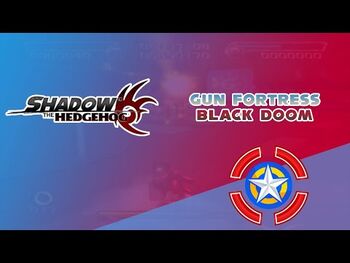 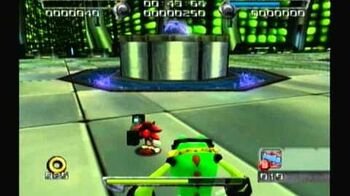 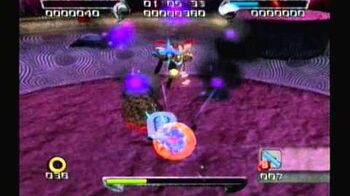