Shadow in Black Comet, from Shadow the Hedgehog.

Near the center of the Black Comet

Shadow, we seem to have a problem with rats running loose on the base. Return immediately to the Black Comet and exterminate them!

Black Comet is one of the sixth Stages in Shadow the Hedgehog, and the home of the Black Arms and their leader, Black Doom. It is reached by completing the Normal mission of either The ARK or Air Fleet, or the Dark mission of Iron Jungle.

So far, the Black Arms have been winning the war against the humans and the heroes. However, G.U.N. has given Earth hope by launching a counterattack on the Black Comet and Black Doom is scrambling for reinforcements, so much so that he has called Shadow the Hedgehog to provide backup and some of his army to fight off G.U.N. forces.

Upon meeting Knuckles, Shadow learns he is determined to defeat the Black Arms once and for all. Even if Shadow and Knuckles work together, they will fight not Black Doom, but rather Eggman's Egg Dealer.

The following weapons can be found in Black Comet:

Behind the Secret Door lies a spring that will take the player to the upper level of the block, where there is a GUN turret and a Special Weapon Container.

The player must defeat fifty GUN Soldiers to complete this mission, with the following amounts required by each Save Point:

Throughout the stage, the player will be riding an Air Saucer often. There are few places that the main path must be deviated from in order to find the GUN Soldiers. After the first Save Point, ride the Air Saucer to the right of the tunnel farther down and get onto the land on the right. This will lead to two GUN Troopers. Upon reaching the next Air Saucer, a total of six GUN Soldiers should have been defeated.

After the fifth Save Point, the player will once again get on Air Saucer and ride through a canal. There are many Big Foot mechs in the canal, but the upper paths are crawling with Gun Beetles as well. Once at the end, avoid going into the Warp Hole until sure that all the GUN Troopers have been destroyed. Upon reaching the large area with the Death Worms, defeat the Black Assassins in order to lower the barrier. In the next area that Shadow can walk on, Light Dash across the Rings to the door and touch the seventh Save Point. The remaining enemies are between here and the Goal Ring.

The player must reach the center of the comet. Begin by using the air Saucer after the first Save Point, and go underneath the bridge that is straight ahead. If the player keep continuing straight, the player will eventually reach the second Save Point. From here, get on the Air Saucer, and go straight ahead until reaching two GUN Troopers. Go to the right to get Knuckles then use the speed ramp to boost up to another platform with a switch. Ride the platform up to the next level, then, after going through the blue door, drop down to the lower area. Run down the path, and get on the Air Saucer at the end. Ride it to the other shore, run down the hallway, then use it to get to the land on the right. Destroy the Black Assassin here and jump across the platforms to the other side, then enter the Warp Hole.

After the fourth Save Point, when the player sees a wide open area, they will need to be on an Air Saucer. Use the Dash Ring to get into the sea of black then head left to get back to land. Once at the end of a long path with many Gun Beetles, the player will enter a Warp Hole.

Just past the sixth Save Point is a large circular area. Grind down the first red vine, then walk along the path until reaching the second torch. From there, drop straight down. Once the next Air Saucer is reached, go straight through the large area and defeat the three enemies to lower the barrier. Once on land again, Light Dash using the Rings and go through the door to the seventh Save Point. The Goal Ring is easily accessible from here.

The only difference in Black Comet's Expert Mode is an increase in enemies. 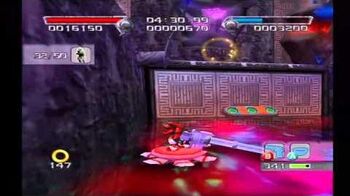 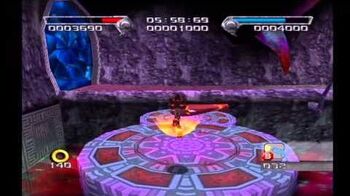 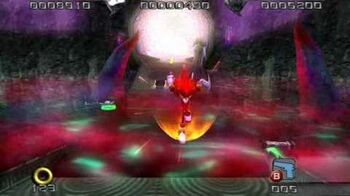