Sonic as the Black Bomb, from the Wii U version of Sonic Lost World.

The Black Bomb (ブラック・ボム, Burakku Bomu?) is a transformation that appears in the Sonic the Hedgehog series. It is the Color Power gained by absorbing a Black Wisp and its Hyper-go-on, which turns the user into a giant bomb.

When using the Black Bomb, the user transforms into a black, orb-shaped bomb. In Sonic's case, his version of the Black Bomb has a small round dish with an ignited fuse on top of him, while his eyes and mouth (which glow purple) can be seen on the front. However, his eyes do not have pupils and his mouth has become wider with serrated sharp teeth.

The Black Bomb made its first appearance in the Wii U version and PC version of Sonic Lost World. In gameplay, the Black Bomb turns the user into a round bomb that can instantly destroy most lesser enemies by rolling over them without any ill effects. Also, by destroying enemies, the Black Bomb will increase in size, thus increasing its area of effect. Additionally, when the transformation is about to end, the Black Bomb will start flashing red). Once the Black Bomb expires, Sonic reverts back to normal in a large explosion which will destroy all enemies caught within its blast radius without damaging Sonic. The explosion's radius is determined by the Black Bomb's size.

To use the Black Bomb in gameplay, the player must have a Black Wisp in their inventory and use it. Once transformed into the Black Bomb, the player's Wisp Gauge starts to deplete, and once it runs out, Sonic will revert back to normal.

When using the Black Bomb in gameplay, the player has the following controls:

Unlike other Color Powers in Sonic Lost World, the Black Bomb, along with the Black Wisp, is only obtained through the Miiverse or by completing any of the DLC Zones (NiGHTMARE Zone, Yoshi's Island Zone and The Legend of Zelda Zone). The player can also earn Black Wisps by completing Missions in the PC version.

To use the Black Bomb in gameplay, the player has to press

while in possession of at least one Black Wisp. This will make the playable character deploy a manifestation of the Black Bomb on the race track. These Black Bombs can either be thrown in an arc in front of the playable character or be dropped behind them. If the Black Bombs hit a wall, they will bounce off them. When landing on the ground, the Black Bombs will likewise bounce off it a few times before coming to a stop and beginning to flash red. The Black Bombs themselves will explode when a rival racer touches them, with their resulting explosion damaging and incapacitating any rival racer temporarily within a fairly large area. Alternatively, the Black Bomb will detonate on its own after a while. However, the player has to be careful when throwing a Black Bomb, because it may fall behind the road due to its bouncing.

As the Black Bomb, the user becomes a living and incredibly dense bomb. The user's body density becomes greatly increased which make them extremely heavy and virtually invulnerable, allowing them to flatten any enemy. Additionally, the user is able to induce widespread explosions by making themselves detonate without causing themselves harm. Additionally, they can built up a charge to increase the size and power of their explosions.

The Black Bomb's only known weakness is that it can only be used for a few seconds and requires more Hyper-go-on to be maintained. 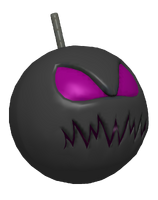