The Biolizard taking its breath, from the Nintendo 3DS version of Sonic Generations.

A battle against the Biolizard who originally appeared in Sonic Adventure 2. This time around, the player takes control of Sonic, and will have to avoid the prototype's old and new attacks alike in order to make it to its life support system.

Biolizard is the second boss in the Nintendo 3DS version of Sonic Generations. Here, Modern Sonic fights the Biolizard, the boss of the Dreamcast Era, who made its debut in Sonic Adventure 2.

Although the fight is very similar to the original one, there are some changes that are made to it. For this battle, it is no longer possible to pass over to the other side of the arena that the back of the Biolizard is facing, and the player is restricted to the area which the Biolizard is patrolling. The Rings around the arena will respawn after being collected, the Biolizard can now project energy spheres from his tail, and if the player falls into the pool below the Biolizard, they will be pushed back to the arena (as if they are hurt) rather than being shoveled along by the water. Furthermore, when the Biolizard is taking his breath, the player has to Homing Attack its mouth to reach his life-support system, and not just Spin Jumping at it like in the original fight. Additionally, all of the Biolizard's attacks will cancel out the Boost and momentum without damaging the player if they make contact. By hitting his life support system and destroying his purple eggs, the player can also refill their Boost Gauge.

After two hits are delivered to the Biolizard, he will start spawning ground and launching aerial-based energy spheres from both its tail and mouth. Try to avoid these spheres and wait for the moment he takes his breath to counterattack. After taking three hits, the Biolizard will try to slam the player with his tail. The player will have to run in the opposite direction of the tail to avoid getting hit. After escaping it, the Biolizard will repeat the same pattern as when he took two hits (using his energy projectiles).

When the fourth hit is delivered, the Biolizard will create several eggs around himself. When his preparations are completed, the camera will change angle so it faces the side of a row of eggs. Use the Homing Attack to skip across the eggs and reach the prototype's life support system for another attack. After landing the fifth hit on the Biolizard, he will use a combination of his previous attacks; sweeping around the arena, using his tail slam, and firing his energy projectiles. When all of these attacks are avoided, proceed forward to attack him once again. After delivering the sixth attack, the Biolizard will use the same pattern as when he took the fourth hit, but now, he can make the eggs disappear and aim some of them at the player.

When being only one hit away from defeat, the Biolizard will cause Sonic to levitate and form a path of eggs which the player has to follow in order to reach the life support system. The eggs will not attack the player while they are floating between them; rather, they will disappear and appear at other points on the path. If Sonic makes contact with them, he will take damage.

After landing the eighth hit, the Biolizard will be defeated. 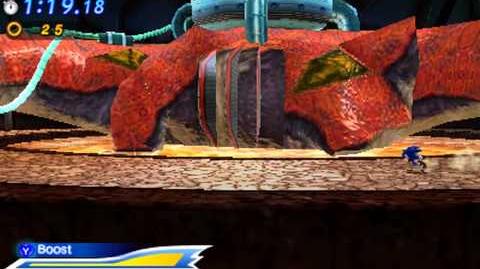