A large experimental lizard-like being that attacks with biting, its tail, energy balls and eggs. For this boss, the player takes control of Shadow the Hedgehog. To defeat it, the player must attack the life support system on its back six times.

The boss battle takes place and is limited on a toroid-shaped field with the Biolizard in the center. Cutting the field in half are two water streams, one closer to the artificial Master Emerald shrine and the other to the pool where Sonic’s section of Cannon's Core ended. While the former stream is harmless, the latter will sweep Shadow into a bottomless pit almost instantly, unless the player jumps out of it immediately.

To defeat the Biolizard, the player must attack the life support system it carries on its back a total of six times, which can be reached with different means through the battle. Hitting the Biolizard's body with attacks such as the Homing Attack will cause Shadow to bounce off it, and sometimes even take damage.

When the Biolizard has taken no hits, it will chase after Shadow on the field by rotating on its axis. It will start by chomping at Shadow which will do damage and send him flying, but if the player moves too far away from its head, it will switch direction and try to whack Shadow with its tail. The player must there constantly keep the right distance from either threats. After about half a turn the Biolizard will tire out and stop to catch its breath. The pipe along its neck will then glow, indicating the player must then grind up it to reach the Biolizard's back and attack its life support system. Take too long to grind the pipe however and the Biolizard will recover and start the phase over.

When the Biolizard has taken one hit, it will chase after Shadow again the same way it did in Phase 1. When it stops moving however, it will start splitting out energy balls that will home in on Shadow, either from a high or low angle. The lows ones can be jumped over while the high ones can be slipped under using Somersault, though the player can also dodge them with very quick movements. Should Shadow get hit by one, the Biolizard will wait shortly before resuming its attack. After firing a total of eight energy balls, the Biolizard will tire out in the same manner as in Phase 1, allowing the player to grind up it and attack its life support system again. The player can also avoid this attack by jumping over the Biolizard's head then waiting out the attack. Should Shadow wait behind the Biolizard's neck it is important to not be too close to the neck or else Shadow will take damage when it moves to recharge. This pattern is repeated for the next hit. 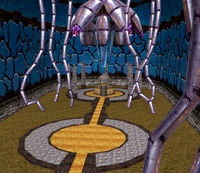