None (Referred to as male)

The Bio Lizard (バイオリザード, Baiorizādo?)[1] is a character that appears in the anime series Sonic X. He was the prototype of the ultimate creature created through Gerald Robotnik's research during Project Shadow. Following the creation of Shadow the Hedgehog, the Bio Lizard was sealed by GUN, but was later retrieved by Gerald and made a part of his plan to destroy Earth as revenge for the death of his granddaughter, Maria Robotnik.

The Bio Lizard was a very large creature, being 85 meters (280 feet) long, 30 meters (100 feet) wide and 19.5 meters (64 feet) at the tallest point on its back.[1] It mostly resembled a grotesque, four-legged lizard with flame skin and a dark gray underbelly, and possesses a long neck and medium-long and thick tail. It had three large and sharp toes on each foot which were black and had robotic parts at the joints, gill-like flaps on his sides, and possessed a large mouth with no teeth and four yellow spikes on the lower jaw. On his neck, back, hinder quarters and tail, the Bio Lizard also had yellow patches of skin.

The creation of the Bio Lizard was conceived when "Project Shadow" was launched. This research project, led by Gerald Robotnik, was meant to create a being dubbed the "Ultimate Creature" for the purpose of experimenting with the immortality endowed in said creature and ultimately protecting the world.[2][3] The Bio Lizard was created onboard the Space Colony ARK from Gerald's research as the biological test prototype for the researchers' desired being, presumably from the genetic material of the lizards used in the experiments.[2] While the Bio Lizard did possess an immortal body,[1] it was eventually abandoned when Gerald created a more advanced and successful being: Shadow the Hedgehog.

When GUN invaded the ARK to put a stop to Project Shadow when the government deemed Shadow too dangerous to control,[3] the Bio Lizard was found by the military and sealed away onboard the ARK.[2] When Gerald later planned to destroy the Earth to avenge his granddaughter Maria's death by having the ARK collide with the planet once the seven Chaos Emerald were inserted in the Eclipse Cannon, the Bio Lizard was retrieved by Gerald and programmed to ensure the ARK would stay on its collision course, having anticipated the likelihood that someone might interfere with the Chaos Emeralds.

For the next fifty years, the Bio Lizard remained inactive onboard the Space Colony ARK until Dr. Eggman initiated Gerald's program that sent the ARK falling towards Earth when trying to use the fully-charged Eclipse Cannon. When Sonic, Knuckles, Decoe and Bocoe came to the ARK's core to stop the ARK by deactivating the Chaos Emeralds, the Bio Lizard ambushed them and kept them from the Emeralds. However, Shadow the Hedgehog arrived to keep him at bay. The Bio Lizard fought Shadow to his fullest but was at a clear disadvantage despite enduring his attacks. After Knuckles stopped the Chaos Emeralds, the Bio Lizard used Chaos Control to teleport outside of the ARK and fused with the space colony itself, becoming the Final Lizard, to keep it on its collision course now that th Emeralds were no longer powering it. Not long after, he faced both Super Sonic and Super Shadow in a battle in space, but was killed by the two hedgehogs, who then returned the ARK back into orbit with Chaos Control.[4]

The Bio Lizard was more of a mindless beast than a sapient being. Highly aggressive and hostile, it was seemingly driven by the singular instinct to ensure that Professor Gerald's doomsday program was carried out successfully, seemingly to the extend that it would sacrifice its life for this cause.

The Bio Lizard possessed energy projection abilities which let it fire beams from its mouth and form energy orbs around it, the latter of which it could either launch as bombs or fire as smaller beams. It possessed as well impressive durability; it could survive all of Shadow's attacks, like his Spin Attack and Chaos Spear, and could even endure several direct hits to its machinery (which was its weakest point).[4]

The Bio Lizard was capable of harnessing chaos energy from the Chaos Emeralds to perform Chaos Control.[4] As the prototype of the Ultimate Creature, the Bio Lizard also possessed an immortal body,[1] though it could still be wounded and killed.

By merging with the tip of the Space Colony ARK's Eclipse Cannon, the Bio Lizard could transform into the Final Lizard. In this form, the Bio Lizard was strong enough to fight both Super Sonic and Super Shadow, and its energy projection ability was greatly amplified in power. It was also durable enough to take blows from Super Form users and keep on fighting. However, its weak point was still its machinery on its back.[4] 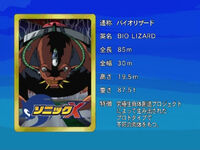