A casino based track in outer space.

Bingo Party is a race track that appears in Team Sonic Racing. It is based off the track of the same name from Sonic & Sega All-Stars Racing.

Unlike the original track, which took place in a large city similar to Casino Park and BINGO Highway, this track appears to take place in outer space; planets, nebulae, stars, and floating space debris can be seen in the background. Along the track, one can also see flying grandstands with cheering Chao on them, giant skyscrapers, various neon signs, stacks of giant casino chips, colossal roulette wheels, floating lotto number plates, and many more casino-themed objects.

After getting through the leftward swing, the road will head downward again for a short while, before evening itself out again and making a sharp turn to the left. On the short straight stretch that follows the swing, the player has to watch out for blue casino-bunny Egg Pawns that stand on the sides of the road. Immediately after, the player will encounter a fork in the road. Regardless of whether the player takes the right or left road, the roads will turn around, take the racers to a higher level and then cross over each other, before turning around again and then merge with each other inside a giant cylinder-shaped bingo drum, forming a purple glass road. The road will then head up a wall and make a series of turns to the left, before heading down the wall and down on ground level. At this point, the player will arrive on a big table full of piles of casino chips and cards. From here, the player has to head towards the gate with the neon sign that depicts Dr. Eggman in order to reach the finish line.

Bingo Party also has its own mirror image version of it where the left and right sides are interchanged. 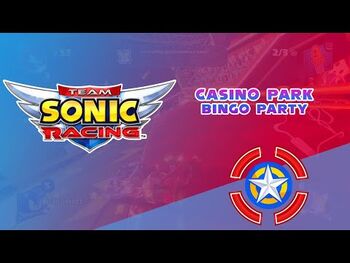