The Billiard Ball, from the Wii version of Sonic Colors.

The Billiard Ball,[1] formerly known as the sphere,[2] is a gimmick that appears in the Sonic the Hedgehog series. They are large balls that are used in for various actions.

Billiard Balls are massive balls about a couple of meters in diameter. They closely resemble billiard balls with different numbers on them. The purpose of the Billiard Balls differ between games, though the player can make them roll by attacking or hitting them. This is an essential part of their function.

In Sonic the Hedgehog (2006), this gimmick is referred to as the sphere.[2] Here, they are all tan with their numbers glowing inside a black circle on them. They appear only exclusively in Silver the Hedgehog's version of Dusty Desert.

In gameplay, spheres are used in puzzles which unlock doors blocking the player's path when solved. In these puzzles, the player is given a number of spheres in a closed chamber where the goal is to dump each of them into nearby marked holes using Psycho Smash. However, the spheres cannot be carried with Psychokinesis. Also, the spheres act much like timers, as the numbers on the balls count down by one with each hit (they start out at nine and descends to zero), and they all share the same number. If they are hit by iron balls or by Psycho Shock however, their numbers will be lowered by more than by one. If the spheres are hit ten times before they are dumped into the holes, they all explode and the player will have to start over. Even if they are hit in very limited amounts, the spheres can still time themselves out even as they roll.

In the Wii version of Sonic Colors, these gimmicks are slightly smaller and are called Billiard Balls.[1] The Billiard Balls also appear in the remaster Sonic Colors: Ultimate. In these games, they have been given a redesign so they perfectly resemble real-life billiard balls. They are only found in the Sonic Simulator, where the player can use them to destroy enemies by sending them rolling into them by hitting them with the Homing Attack or Boost.

In some cases, the Billiard Balls move around on platforms and can hurt the playable character should they make contact with them. 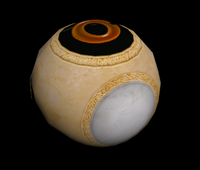 The Billiard Ball in Sonic the Hedgehog (2006).